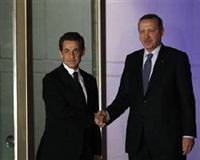 French President Nicolas Sarkozy on Friday used his first visit to Turkey since taking office to repeat his opposition to Ankara's bid to join the European Union and said both sides should consider an alternative association.

"We have a point of disagreement that is well known," Sarkozy bluntly told a joint news conference in the Turkish capital Ankara with his Turkish counterpart Abdullah Gul.

"We spoke as statesmen, which is to say that we tried to understand each others' red lines in order to try to find ways in the future that do not lead either to the destabilisation of Europe or to the humiliation of the Turkish society as it is modernised," Sarkozy said.

Gul, whose country had expressed disappointment at the shortness of the visit, insisted that membership remained a priority for Turkey and urged France not to block the country's accession talks, which are already at a standstill.

"We expect the EU to keep their word regarding Turkey's accession process to EU," Gul said.

EU countries agreed unanimously in 2005 to start talks with Muslim Turkey with the goal of full membership. Turkey complains some EU states have already decided against admitting a large Muslim country of 75 million people with a growing economy.

Sarkozy, who visited Ankara for about six hours in his capacity as president of the G-20 forum rather than on a state visit, insisted he favoured a privileged partnership with Turkey -- a position Ankara vehemently rejects.

"I think that between full membership and association, which the Turks have said several times they don't want, there is a balanced path that can be found when we look at this issue in peace and with vision," Sarkozy said.

Turkish Prime Minister Tayyip Erdogan had said he would bring Sarkozy to task for his negative stance towards Ankara's accession bid, but there was no apparent sign of tension when the two men met later on Friday.

Smiling and looking relaxed, Erdogan told Sarkozy in front of the cameras his visit was a chance for the two countries to "build a future together" and said he expected Sarkozy to visit soon as president of France.

Officials in Paris had said Sarkozy's meetings with Gul and Erdogan would mainly focus on G20 issues and the Middle East.

Hoping to get fresh momentum behind his country's flagging membership bid, Erdogan is due to meet Chancellor Angela Merkel on Monday in Germany before going for talks in Brussels on Tuesday with European Commission President Jose Manuel Barroso.

A stalemate over the divided island of Cyprus means a breakthrough is unlikely.
Of Turkey's 35 chapters -- or negotiating subjects -- only one has been completed, 12 are under discussion and 18 have been frozen because of opposition from France, Cyprus and other members. Paris alone has frozen five chapters, including key monetary issues, to underline its oppostion to Turkey.

After a decade of rapid growth, Turks are more confident in their economy, and have been put off by EU member states reluctance to admit them to the bloc, while also noting the economic problems besetting the euro zone.