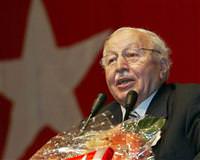 "Erbakan was a scientist who devoted his life to learning. We will remember him with gratitude," said Prime Minister Tayyip Erdogan who rose to prominence as one of Erbakan's lieutenants.

Erbakan, who had previously worked as an engineer, laid the foundations of the Turkey's modern Islamist movement in the 1970s, building up a party that appealed to the conservative rural population and urban poor in a country where religion is officially excluded from political life.

Turkey in the late 1970s was marked by fierce street clashes between left- and right-wing gangs, but it was a rally by 100,000 Islamist Erbakan supporters in September 1980 that was the last straw for the generals, the self-appointed guardians of the secular constitution, who launched a coup six days later.

Erbakan, along with other politicians, was briefly jailed then banned from politics for five years. When he returned, Erbakan set about building the formidable national grassroots party organization later inherited by Erdogan.

Erbakan's party came top in the 1995 election and in 1996 he took charge of a coalition government, becoming the first Islamist prime minister in Turkey's modern history.

But the military forced him to resign after a tempestuous year in government in which Erbakan worried the generals by attempting to forge alliances with radical Muslim countries and his followers questioned the secular constitution.

The country's highest court then banned Erbakan's Welfare Party in January 1998 for failing to respect the constitution. The court seized the party's assets and banned Erbakan and other party members from politics for five years.

But with more than four million members, Welfare's support did not simply evaporate and the ban on Erbakan opened the way for Erdogan to rise to the fore of a new, more disciplined party that eschewed much of Welfare's more radical rhetoric.

Erdogan's AK Party came into power in 2002 with a landslide victory and is widely expected to win a third consecutive term at an election in June.

Erdogan and his party, many of them former Erbakan followers, have downplayed their Islamist roots and have instead pushed through democratic reforms in pursuit of Turkey's decades-old bid to join the European Union.

That has also succeeded in restricting the power of the military, making the prospect of another major political intervention by the armed forces unlikely.