Erdogan calls for integration in Germany 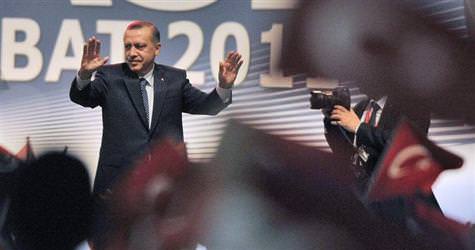 Turkish immigrants in Germany should integrate into society but not assimilate to the point where they abandon their native culture, Prime Minister Tayyip Erdogan said on a visit to Germany on Sunday.

Speaking to some 10,000 members of Germany's large Turkish community in the wake of last year's heated debate over the place of foreigners in the country, Erdogan took up the theme of integration amid what he sees as persistent European xenophobia.

'You must integrate, but I am against assimilation ... no one may ignore the rights of minorities,' he said, adding that individuals should have the right to practice their own faith.

On Saturday, Erdogan threw an even sharper barb at German immigration policy, telling the Rheinische Post newspaper that forced integration requiring immigrants to suppress their culture and language was an affront to international law.

Immigration leapt to the forefront of political debate last year after central banker Thilo Sarrazin published a bestselling book that argued German culture was at risk from Muslims, who he said were a drain on state coffers.

Erdogan's newspaper comments were published alongside those of a senior German politician who complained of discrimination against Christians in Turkey.

Conservative parliamentary floor leader Volker Kauder told the same paper that lands of a Christian monastery in Turkey known as Mor Gabriel were being expropriated, which he said showed that the Muslim country lacked religious freedom.

'I urge the EU to not open any more negotiation chapters with Turkey as long as Turkey does not guarantee full freedom of religion,' Kauder said.

Erdogan's speech on Sunday comes ahead of a meeting with German Chancellor Angela Merkel scheduled for Monday, where Turkey's bid to join the European Union is likely to come up.

Turkish leaders have sounded increasingly impatient with lack of progress in entry talks that began in 2005, though they insist membership remains their top foreign policy goal.

In his newspaper interview, Erdogan again derided what he described as European foot-dragging over the entry talks, saying he expected more German support for Turkey's bid.