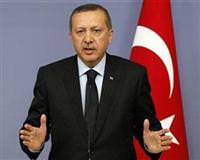 Prime Minister Tayyip Erdogan tries to revive Turkey's flagging European Union entry bid in a trip to Germany and Brussels this week, but a stalemate over Cyprus means a breakthrough is very unlikely.

Erdogan's visit to the EU headquarters, his first since June 2009, comes as Turkish leaders sound increasingly frustrated over stalled progress in entry talks that began in 2005.

But the division of the Mediterranean island of Cyprus, and reservations by heavyweights Germany and France about granting Muslim Turkey full membership, are obstacles.

Scepticism in Brussels over Ankara's appetite to push tough reforms before a parliamentary election in June has added to what EU Enlargement Commissioner Stefan Fuele calls a "credibility" problem between the two sides.

Out of 35 chapters -- or subject areas for negotiation -- Turkey has only completed one, 12 are under discussion and 18 have been frozen because of opposition by EU member states including Cyprus and France.

"Frustration is rising on both sides," Fuele said recently in Brussels. "We need to have a new momentum in the relationship with Turkey because it is a strategic partner of the EU."

Erdogan, who will be accompanied by Turkish Foreign Minister Ahmet Davutoglu, is due to meet German Chancellor Angela Merkel in Germany on Monday before holding talks in Brussels on Tuesday with European Commission President Jose Manuel Barroso. He will also see European Council President Herman Van Rompuy.

The EU wants Turkey to amend a constitution drafted after a 1982 military coup and to expand minority rights. A Commission report in November chided Ankara for curbing media freedom.

Turkish leaders have accused some EU member states of using the dispute over the divided island of Cyprus to block Turkey's bid and have aired suspicions that some countries do not want a Muslim nation with a large population in the 27-member bloc.

Amanda Paul, a Turkish expert at the Brussels-based European Policy Centre think tank, said neither side was willing to suspend the talks.

Turkey is vulnerable to domestic instability, so investors find reassurance in EU-driven reforms even in slow motion. The status of the EU candidate has brought foreign investment and prestige to Turkey, which has access to European markets and has expanded business ties in Asia, Africa and the Middle East.

"Europe needs to keep Turkey engaged and wants to see reforms in Turkey, while Turkey wants to show it is still a candidate country, so we can expect Barroso to tell Erdogan the EU is fully committed to Turkey's full membership and Erdogan to tell Barroso Turkey is committed to EU entry," Paul said.

She said that given the problems in the euro zone there is little chance the EU will hurry admission for Turkey.

With upheaval rocking the Middle East, secular and democratic Turkey has been cited as a role model for change.

Turkish officials are likely to play up as assets Ankara's strategic location and its role as sole Muslim nation in NATO with open channels to Iran, Syria, the Caucasus, Afghanistan, Pakistan and, until recently, Israel.

But resistance within the EU plays against Turkey.

French President Nicolas Sarkozy, in a visit to Ankara on Friday, reiterated his views that Turkey does not fit in Europe and said both sides should consider an alternative association.

"I think that the most useful way of avoiding the risk of deadlock is to try to discuss ways of finding a compromise," Sarkozy told a news conference.

Merkel, who will see Erdogan in Hanover on Monday, shares Sarkozy's views.

The views of Sarkozy and Merkel, along with lack of progress on a visa-free agreement between Turkey and the EU, have contributed to a fall in support in Turkey for joining the bloc, and surveys show many Turks believe the EU is not a priority.

But Hugh Pope, an analyst at International Crisis Group, said unrest in the Middle East should be a "wake up call" to make Turkey focus on its EU reforms, including solving Cyprus.

"Turkey's long-term goals are best served in its relation with the EU. Turkey has no real alternative to the EU."