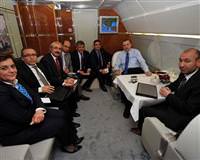 Erdoğan commented on the recent ruling by the Supreme Election Board which prohibits the rights of Turkish nationals abroad to vote in the general elections from Turkish consulates.

Speaking to Ankara correspondents upon his return from Germany, Prime Minister Tayyip Erdoğan discussed the Supreme Election Board, or YSK, ruling against allowing Turkish nationals to vote from their resident countries abroad in the upcoming June 12th general elections.
THIS IS A BLOW AGAINST FREEDOM
On Sunday, the Supreme Election Board announced a ruling against allowing Turkish nationals abroad to vote from their countries of residence. Erdoğan responded to the decision by stating the following; "This ruling is a blow against the rights and eligibility to vote for our nationals living abroad."
"Merkel states; 'There are no obstacles on our end.' However our Supreme Election Board goes ahead and makes this decision as I am making an address in Germany. Comrades, is this some sort of sabotage against me?"
Erdoğan also noted that they will be researching whether or not it is possible to revise the Supreme Election Board ruling.