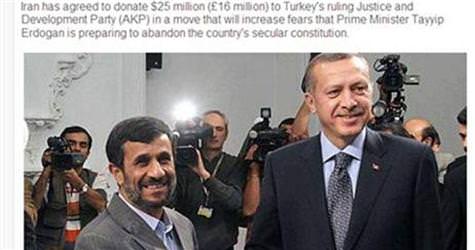 Erdoğan won a case against England’s Daily Telegraph for libel yesterday. The newspaper has been ordered to pay 25,000 sterling in compensation.

CASE HEARD IN LONDON
The English daily apologized for claiming Iran had donated 25 million dollars to the AK Party campaign in an article published on September 14th, 2010. With yesterday's ruling for the case heard in London however, the Daily Telegraph will now be subject to pay out 25,000 sterling (65,000 TL) in compensation for slander. Erdoğan's attorney Emma Edhem states, "The court has ruled that the accusations were baseless."
Prime Minister Recep Tayyip Erdoğan filed a lawsuit last November with the London Royal Courts of Justice for libel against the England's Daily Telegraph for publishing an article by Con Coughlin on September 14th, 2010 in which it was stated that Iran had donated 25 million dollars to Turkey's ruling party. The trial's first hearing was held yesterday and within ten minutes, Judge Michael Tugendhat approved the conditions previously arranged by both parties.
Accordingly, in addition to covering all legal costs, Telegraph Media Group will also be paying out a compensation of 25,000 sterling to Prime Minister Erdoğan. The newspaper also published an apology to Erdoğan on both their website and in the newspaper.

'It IS APPROPRIATE FOR THIS CASE
Admitting that the allegations published were incorrect, the daily apologized to Prime Minister Erdoğan. According to Erdoğan's attorney, Northern Cypriot Emma Edhem, the 25,000 sterling compensation ordered is appropriate for this type of case. Edham shared the following with SABAH: "We could not accept anything less for our client the Prime Minister, because the accusations were so grave."