Should the youth die just so you get a mandate? 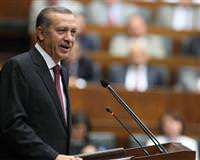 Erdoğan delivered an address at the opening of the Public Order and Security Undersecretariat building in which he issued harsh criticism against the Peace and Democracy Party or BDP.


Prime Minister Erdoğan dished up harsh criticism of the BDP questioning if what they do is 'humanity.'
Expressing that they are taking on the PKK's work prior to the election, Prime Minister Erdoğan accused BDP of being a spokesman for the terrorist organization.
"If you base your politics on being spokesmen for terrorism and if all you care about are the prison conditions for a terrorist organization's leader then you cannot be on of Turkey's political parties. And for what cost…
"The deaths of youth, their mother's tears, their father's heartbreak, and streets transformed into battlefields all to seek out votes, this becomes a case of opportunism. Are the youth going to die just so you get a mandate? And then you threaten the Prime Minister…"