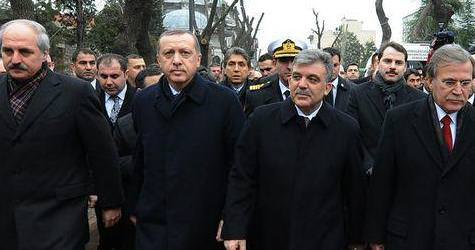 Turkish President Abdullah Gul was sitting before two dozen young men and women from the vanguard of Egypt's democratic revolution, when he got a text message from his son studying in the United States.

"They're tweeting what you say," was the message, Gul told his delighted audience in the cool, marbled atrium of the Turkish embassy in Cairo beside the River Nile.
Gul was offering wise counsel to everyone from the generals overseeing Egypt's transition to a constitutional democracy, to potential presidents, and leaders of all the main political movements, along with intellectuals, writers, and some the youth who had protested in Tahrir Square.
The first head of state to visit since President Hosni Mubarak quit on Feb. 11, what Gul had to say resonated in a country whose presidents have come from the military since Gamel Abdel Nasser's "Free Officers" overthrew the monarchy in 1952. Turkey, similarly, had been tightly controlled by the military, especially since a 1960 coup that saw the execution of three senior ministers, including the prime minister.
Watching the Cairo demonstrations on television on Thursday, Gul was reminded of his student activism and how a military coup in 1980 had ruined the first weeks of his marriage.
"My honeymoon was spent in a military prison," he recalled to laughter round the room.

WE WANT TO BE LIKE YOU
The AK Party, to which Gul belonged until he became president, swept to power at 2002 elections where voters abandoned traditional secular parties blighted by corruption and economic mismanagement. It pressed reforms that have slashed back the influence of of a very wary military.
Many in Egypt fear the military, in control since Mubarak's fall, might prove reluctant to fully abdicate its powers when elections take place.
Speaking to journalists on his flight back to Istanbul, Gul said the Egyptians he met volunteered admiration for what the AK Party had achieved.
Gul said they told him: "Turkey is a model for us.
"You are Muslim, you are democratic, you are secular, your economy is progressive, so this is the model for us." Turkey's elections are widely regarded as fair and AK is on course to win a third term when the country votes on June 12.
Critics back home, nevertheless, question the AK Party's democratic credentials. They point to the detention of journalists in a widening investigation into alleged military- backed coup plots as evidence of government intolerance.
Just as some Egyptians see a danger of the Muslim Bortherhood winning elections and building a theocracy, so some Turks see the AK Party amassing too much power and pursuing a hidden agenda to introduce Islamic law in Turkey.
Both Gul and Prime Minister Tayyip Erdogan emerged from banned Islamist movements at the end of the 1990s to create the Justice and Development Party, known as the AK.
The party promotes Muslim values, but pledges loyalty to secular principles of the republic Mustafa Kemal Ataturk founded in 1923 out of the ruins of the Ottoman Empire.
Met at Cairo's airport by a foreign minister in an interim government whose cabinet had just resigned, Gul went straight for talks with Field Marshal Mohamed Hussein Tantawi and the rest of Egypt's Military High Council.
An aide of Gul, a man viewed with some suspicion by the Turkish high command, said Tantawi had concluded the three hour meeting, saying: "The Turkish experience is the closest to us.
It's an example we can really benefit from." Gul came away from that meeting convinced the generals intended to guide Egypt towards elections as soon as possible and hand over to a civil authority.

TRUST DEMOCRACY AND FREE MARKET
Aside from relating the reforms Turkey had undertaken, Gul said he stressed the importance of sound economic management, in particular warning against any populist measures like boosting civil servants' salaries, that could lead to inflation.
Meeting leaders and youth members of the Muslim Brotherhood, Egypt's largest opposition movement, Gul saw signs of them joining the political mainstream, leaving dogma behind.
"I found them very logical," Gul said. "I don't think that there are hidden agendas." Asked whether freedom could encourage militant forces, Gul replied: "I said don't worry about it. Democracy reshapes all the radical movements. I sincerely believe this." He said the revolution had given the Egyptian people back their diginity. The Muslim Brotherhood, liberals and all the other groups had common aspirations
"All of them say: a free democratic Egypt is enough for us." The success of the transition, Gul told Egypt's generals and everyone else he met, depended on whether the result satisfied the young generation that had ended Mubarak's 30-year autocracy.