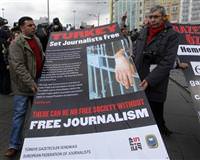 Recent arrests of journalists in Turkey will have a "chilling effect" on free speech, Human Rights Watch said on Saturday, and urged the European Union candidate nation to demonstrate commitment to press freedom.

Authorities say the arrests were part of an investigation into an alleged plot to overthrow Prime Minister Tayyip Erdogan's AK Party government. But critics say the case is being used to hound them, and the EU and the United States have expressed concern about press freedoms and democracy in Turkey.

"In the absence of evidence that the police have credible reason to think Nedim Şener and Ahmet Şık are responsible for wrongdoing, their arrests are a disturbing development," said Emma Sinclair-Webb, Turkey researcher at Human Rights Watch.

"It raises concerns that what is now under investigation is critical reporting rather than coup plots."

All of them are known to be critical of the government.

The case comes at a sensitive time.

Erdogan has said the arrests had nothing to do with the government but the case threatens to become an election issue.

Thousands of people, many of them journalists, marched in Ankara and Istanbul on Friday in response to the detentions and chanted anti-government slogans.

Sinclair-Webb urged the government to take steps to "remove all restrictions in law on freedom of expression and to demonstrate a commitment to press freedom and lively critical debate, which together are the hallmarks of a democracy."

Sinclair-Webb also said that Human Rights Watch has repeatedly raised concerns about restrictions on freedom of expression and press freedom, through laws introduced by the Erdogan's AK Party government.

Hundreds of people, from military officers to academics and politicians are being tried over a series of alleged plots in cases which reflect deep suspicion between the secular establishment and Erdogan's AK Party.