‘State of emergency’ due to snow and blizzard 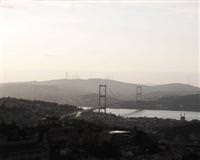 Temperature drops of 8-10 degrees are expected today in Istanbul. Officials warn that bridges and viaducts could freeze over and sea transportation may be disrupted.

The State Meteorology Department has issued a warning for the cold wave and rainy weather to effect the city as of today and is expected to last until Thursday; Temperatures are expected to drop by 8-10 degrees. According to Istanbul Mayor Kadir Topbaş, "Due to temperatures expected to drop down to -2 degrees; we have announced a state of emergency at Istanbul's Disaster Coordination Center (AKOM). According to information from the Meteorology Center a number of complications could arise. Rain and sleet is expected for after Monday."
DO NOT USE YOUR OWN CARS
Topbaş also invites Istanbul residents to not use their own cars and to instead try to use public transportation and has assured that measures have been taken to assist the homeless. "We will provide shelter for a number of homeless in sports halls. At present we have offered shelter for 184 citizens in hotels and sports centers." Also reminding that those whose transportation routes are over sea must also take care, Topbaş states;"Istanbul's Sea Buses may not operate, citizens must take precautionary measures. Ferry boat services may also be postponed."
According to an announcement released by the Istanbul Metropolitan Municipality, the wind is anticipated to blow at up to 80-100 kilometers an hour, officially reaching storm status. The announcement states that due to the possibility of a blizzard forming from the snowfall, visibility will be low, which could result in traffic delays. In addition, drivers have been warned to be aware of the risk of possible freezing occurring on bridges and viaducts due to instantaneous temperature changes.