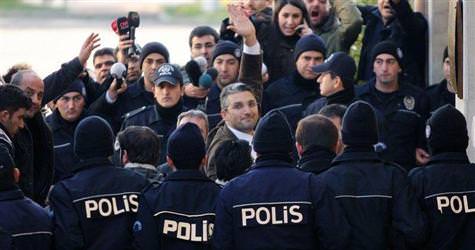 A court on Sunday charged two more prominent journalists with links to an alleged plot to topple the Turkish government in a case that has raised worries of media freedom in Turkey.

Nedim Şener and Ahmet Şık, who have written investigative books about Turkey's clandestine "deep state" activities, were detained on Thursday with six other journalists after police raided their homes at dawn. They were jailed pending trial.

Another prominent journalist, Soner Yalcin, who runs a news website critical of the government, was charged last month as part of the same case, which has turned the political heat on the government before elections in June.

The arrests of journalists in Turkey, a country which has applied to join the European Union, has also drawn expressions of concern from the United States, the EU and Human Rights Watch about Ankara's commitment to democratic principles and free media.

Authorities say the arrests are part of an investigation into an alleged plot by a murky ultra-nationalist group known as Ergenekon to overthrow Erdogan's AK Party government.

But critics say the case is being used to silence media critical of the AK government, which has a huge majority in parliament and controls levers of state power.

Şık is already on trial over a book he co-wrote about the Ergenekon group. He had also written stories in a now-defunct magazine about diaries by a formal navy commander outlining the existence of an alleged coup plan against Erdogan's government.

Şener has written books about the investigation into the killing of Turkish-Armenian journalist Hrant Dink in 2007, in which members of Turkey's clandestine state apparatus have long been suspected of having a role.

The government is expected to easily win a third consecutive term in parliamentary elections in June.

Erdogan has said the arrests have nothing to do with the government but the case threatens to become an election issue.

Thousands of people, many of them journalists, marched in Ankara and Istanbul on Friday in response to the detentions and chanted anti-government slogans.

Public opinion was behind the government after the first Ergenekon arrests back in 2007, particularly of retired military and police officers, as few Turks want a return to the coups that blighted the country in the late 20th century.

But skepticism set in as the case broadened and police detained academics, journalists, civil society workers, and in one case, a transsexual singer. Hundreds have been taken in and many suspects have been held for more than two years.

The trials reflect a lingering mistrust between the traditionally secular establishment and a ruling party that critics say retains Islamist leanings.

The AK Party, which swept establishment parties from power in 2002, is regarded by investors as the most market-friendly party due to Turkey's economic success over the past decade.

Critics accuse Erdogan of having an authoritarian streak and say AK has lost its reformist spirit after eight years in power.