Kurdish intellectuals speak out against the PKK 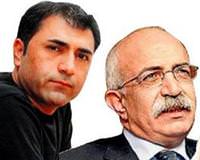 Forty-one Kurdish intellectuals have joined forces to speak out against death threats issued by the PKK terrorist organization, in a statement that claims: ‘These are attacks against freedom of thought.’

In an announcement released by a series of Kurdish intellectuals, it was stated that the PKK has issued death threats against notable Kurdish figures such as Şivan Perwer, Muhsin Kızılkaya and Mehmet Metiner. The announcement also reveals that Öcalan had stated, "Someone needs to quiet these people."
"THE PKK MUST STEP BACK"
The announcement goes on to state; "We, whom have signed below perceive these threats as a major attack on freedom of thought that we are protesting. We invite Öcalan, the PKK and the KCK administrators to step back…"
"WE NEED AN OPEN STANCE"
We are calling on the administrators, parliamentarians and mayors of the Democratic Society Congress to display an open stance…"
Forty one prominent Kurdish intellectuals including Aralarında Fırat Ceweri, Celile Celil and Sertaç Bucak signed the statement.