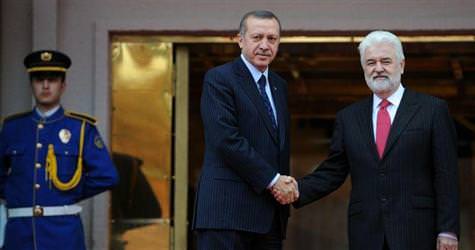 Erdoğan issued harsh criticisms of the recently released European Parliament report in response to a slew of arrests in Turkey including members of the press: “This report is not balanced whatsoever. Excuse me for saying this but I believe those who prepared this report also lack balance.”

After meeting with Serbian Prime Minister Cvetkovic, Prime Minister Erdoğan held a press conference in which he responded to the European Parliament report criticizing press freedoms in Turkey, by stating; "It is far from Turkey" Erdoğan stated that those who were responsible for preparing the report are not familiar with Turkey…
"PREPARED BY ORDER"
"I perceive this report to be entirely based on an order penned by whomever prepared this report. Because, the statements used do not accurately represent freedom of press in Turkey. There are 27 individuals that are members of the press currently in custody. Not a single one of them is being held for something they wrote.
"OUR DUTY IS TO GO OUR OWN WAY"
When asked by a journalist whether o not any steps would be taken regarding this report, Erdoğan stated, "There are no steps we need to take. Their duty is to prepare the report, and ours is to go our own way. It is that simple."

Prime Minister Tayyip Erdogan slammed a European Parliament report that noted a deterioration in press freedom and women's rights in Turkey, saying it was unbalanced and written by people who did not know the country.
"There is no balance in this report. Excuse me, but I believe, people who have prepared this document lack balance as well," Erdogan said during a joint news conference with the visiting Serbian prime minister late on Thursday.
In a resolution passed on Wednesday on Turkey's accession bid, the European Parliament said the recent arrests of journalists could undermine confidence in Turkey's judiciary and adherence to democratic principles.
The report followed arrests in recent weeks of more than two dozen journalists accused of being part of an ultra nationalist, secularist group plotting against Erdogan's government.
The United States has also voiced concern over the arrests and called for a transparent investigation
Ergogan, whose AK Party promotes Muslim values while denying plans to roll back the republic's traditional secularism, said 27 journalists were being held on suspicion of belonging to terrorist organisations and not because of their writings.
The prime minister, who has sounded increasingly impatient over the slow progress made since opening EU membership negotiations in 2005, said he saw no need to heed the European Parliament's report and Turkey would continue on its own way.
He said that the report did not describe the state of press freedom in Turkey and was "far from reflecting the reality in our country".
Turkey holds a national election in June, and opinion polls show Erdogan's AK on course to win a third consecutive term of single party rule, with a parliamentary majority.
If it wins, the AK plans to bring in a new constitution to replace one written under military rule in the early 1980s.
Using reforms meant to enhance Turkey's case for EU membership, the AK has succeeded in reducing the influence of a military that toppled four governments between 1960 and 1997.
Europe's Parliament commended Turkey on amendments to the constitution made after a referendum last year, and said more reform was needed to transform Turkey into a real democracy.