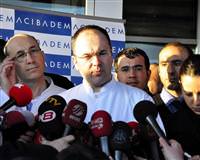 Maslak Acıbadem Hospital Chief Physician Çağlar Çuhadaroğlu has announced that there is still the risk of fatality for Ibrahim Tatlises, however his condition has improved since he was first admitted to the hospital.

Çuhadaroğlu was joined by the doctors who operated on Tatlises to release an announcement for the press at the hospital entrance. Çuhadaroğlu explained that there was bleeding present due to the damage incurred on the cerebral cortex as well as within the brain and therefore their priority right now was to stop the bleeding.
Explaining that a bullet entered Tatlises' skull from behind and exited from the front resulting in a crack, Dr.Çuhadaroğlu states that the famous performer may be in danger of partial paralysis.
Çuhadaroğlu went on to state that in order to determine the patient's latest status, he needs to undergo a tomography, which will be done sometime today however as of right now, it was impossible to say anything concrete on Tatlises' condition.
Çuhadaroğlu also stated that the question of just how many bullets hit Ibrahim Tatlises will be answered following an investigation by Forensics Medicine. Stating that Tatlises will be put to sleep for the next 24 hours, and they will then later asses his condition, Çuhadaroğlu also noted that Tatlises also has bullet wounds located on or around his nose.
Tatlises' press advisor Buket Çakıcı was also in the vehicle at the time of the shooting and has since also been operated on. According to Çuhadaroğlu, Çakıcı is in better condition than Tatlises.
Stating that the bullet went through Çakıcı's throat, Çuhadaroğlu explains that she also has wounds on her face. A plastic surgeon was present and took part in both patients' surgeries and Çuhadaroğlu states that both Çakıcı and Tatlises are being closely monitored.
TATLISES' VEHICLE TAKEN TO POLICE DEPARTMENT FOR INVESTIGATION
The vehicle Ibrahim Tatlises was inside of at the time of the attack and which was used to transport Tatlises to the hospital has since been brought to the police department parking lot for further inspection. It was observed that the license plate and bullet holes on the automobile, which was towed to the lot, had been covered up.