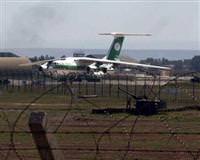 An Iranian airplane was forced to land at an airport in southeast Turkey late on Tuesday on suspicion that it may have been carrying arms to Syria, officials at Diyarbakir airport said.

A Turkish foreign ministry official in Ankara confirmed that the plane had been asked to make a "technical landing", but declined to say why.

"The plane was coming from Iran and going to Syria. It was a cargo plane," the official, speaking on condition of anonymity because of the sensitivity of the matter, told Reuters.

He said the Turkish authorities had a legal right to search the plane and ask for the passports of people on board.

Witnesses reported seeing a plane, resembling a Russian-made Ilyushin 62, with Arabic or Farsi script and green livery, parked on the tarmac at Diyarbakir airport. The airport is used for both civilian and military aviation.

The aircraft complied with an order to land and arrived at Diyarbakir at 11:30 p.m. (2130 GMT), airport officials said on condition they were not identified.

The plane, which had two pilots, an unknown number of crew members and no passengers, was still waiting to be searched, they said.