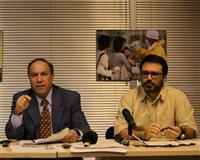 Turkey should abandon plans to launch nuclear power plants, because its proximity to geological fault lines means it could face a nuclear crisis like the one in Japan, Greenpeace said on Thursday.

Prime Minister Tayyip Erdogan on Wednesday said plans for a Russian-built plant on Turkey's Mediterranean coast and a second one for its Black Sea coast, which is under discussion with Tokyo Electric Power Co and Toshiba, won't be affected by the risk of a natural disaster like the earthquake that struck Japan.

Turkey is crisscrossed by fault lines, and small and medium earthquakes are a near daily occurrence. Two large quakes in 1999 killed more than 20,000 people.

"It is a mistake to go nuclear after what has happened in Japan," Uygar Ozesmi, Greenpeace's Mediterranean director, said at a news conference. "In a quake-prone country like Turkey, you cannot launch a nuclear power industry."

Japan's Fukushima nuclear complex has been torn apart by four explosions since a 9.0-magnitude earthquake and a tsunami hit on March 11. Nuclear experts have warned the crisis in Japan may rival the extent of the 1986 Chernobyl accident, which spewed a cloud of radiation across Europe..

Energy officials have said Turkey will use third-generation technology that is safer than that used at Fukushima.

"Regardless of the dangers of an earthquake, nuclear technology itself is the main risk," Ozesmi said. "Whatever generation you use requires a cooling system, and when we look at any major nuclear incident, the cooling system is at fault."

Turkey has enough wind and solar power potential to more than compensate for the electricity it hopes to generate from nuclear, Ozesmi said.

The government says Turkey must diversify its energy mix and boost supply to keep up with soaring demand amid rapid economic growth. It targets generation of 20 percent of power from nuclear by 2030.

The site planned for the Mediterranean nuclear station is only a couple of dozen miles from a fault line, which geologists fear is at danger of sliding at any time, said Hayrettin Kilic, a nuclear physicist who campaigns against atomic power.

"The Russian technology does not comply with Western standards, and Japanese companies have struggled to get licenses elsewhere. Both have design problems with their cooling systems," Kilic said,

During a visit to Moscow on Wednesday, Erdogan said construction on a plant might start next month.