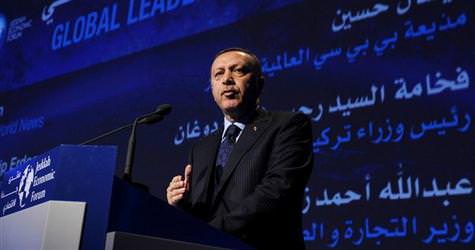 While coalition forces embarked upon a second day of strikes, Gaddafi was unable to set flight to a single plane and by halting the attacks in Benghazi, was forced to call for a cease-fire.

The second day of 'Operation Odyssey Dawn' began with air strikes launched by France in the morning hours. Later, U.S. Harriers war planes hit Gaddafi's land troops and air defense system.
B-2 stealth jets left 40 bombs on an air defense base. The name of the base has not been released.
The pentagon released another 124 Tomahawk missiles. However, no civilian targets were hit.
A very critical site to Gaddafi was hit in Trablus, while in Benghazi; a number of vehicles were destroyed.
Gaddafi forces were forced to halt attacks in Benghazi and in the evening hours a ceasefire was announced.
'Withdraw before more blood is shed'
During the Jeddah economic forum, Prime Minister Erdoğan stated. 'This period of brothers killing brothers must swiftly be brought to an end and the will of the Libyan public must dominate."
Speaking at the 11th annual Jeddah Economic Forum, Prime Minister Recep Tayyip Erdoğan answered a number of questions regarding the recently initiated operation in Libya. Stating that he spoke with Muammer Gaddafi on March 1st and requested he step down, Erdoğan went on to state, "Unfortunately, we were not successful.
Erdoğan also stated, "This period of brothers killing brothers must swiftly be brought to an end and the will of the Libyan public must dominate," and went on to deliver a number of messages in Jeddah:
'SHOULD GADDAFI GO?'
(When asked, Should Gaddafi go?) "We are already past that stage. At this point, Gaddafi is in turmoil with himself. As you know, from the very start, he would say, "I am not an official leader of Libya.' What the person who is not officially the leader of Libya must do is to hand over that duty to someone who is officially in charge of Libya.
I said it to him as well as to his son over the phone. I said, "This needs to be done. You need to pay respect to the will of the public and this needs to come to an end as soon as possible." However, unfortunately it has come to this point.This conversation I had was on March 1st. Unfortunately, we were not succesful in doing this."
One of the most significant factors in the immense change Turkey has achieved is the nation's active foreign policy. As Turkey, we place just as much significance on our own peace stability and peace as we do on achieving peace and stability in the region.
If there is unrest in Iraq, then we are not in harmony. If Lebanon is unhappy, we cannot be happy. While Libya cries blood and tears, we cannot just sit and watch with our hands tied. When Palestinian children are being subjected to phosphorous bombs, we cannot act as if nothing has happened.
We respent the independence and soil of every country in this region. We have never interfered in any country's internal affairs and we never would. We do not have hidden notions regarding any nation.
We have no interest in these country's underground or onland wealth. We believe that regional peace is extremely important for every county and we are solely trying to provide contributions to regional peace.
NEW OTTOMANS
Allegations of a new Ottoman Empire is an unacceptable indictment. This allegation is simply a claim being thrown in to obstruct Turkey's efforts to achieve peace with alterior motives.
Those that are uncomfortanle by Turkey's sincere efforts to collaborate are those concerned their dirty interests will come to an end. That is why we solely call for brotherhood' in the region. We have no other intentions in the region besides solidarity, collaboration and brotherhood.
We have always been one and together in this geography. We have felt joy together and sadness together. No matter how joint our history is, know that our future will be also that entwined. As Turkey, we are struggling to establish a peaceful future by solving regional issues.
If only a solution to the situation in Libya could have been reached before it got to this point. If only the period of transition could have been completed in Libya, Egypt and Tunisia without having to pay this price.
From here on out, we want the military intervention to come to an end as soon as possible. We hope that Libya can achieve stability as soon as possible.
I am not despondent. We can stop the tears and bloodshed in this region together. The situation can change and we can change it."