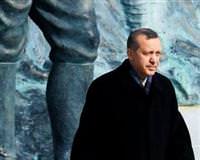 Turkish Prime Minister Tayyip Erdogan on Sunday urged Muammar Gaddafi to give up power and called for an immediate end to the violence.

Gaddafi has no official government position but is known as the "Brotherly Leader and Guide of the Revolution".

Asked by reporters during a visit to Saudi Arabia whether Gaddafi should step down, Erdogan said: "He has already passed that period, he is contradicting himself.

Erdogan repeated that he had called Gaddafi several times this month and suggested he appoint a president with popular backing as a way to end the crisis.

NATO-member Turkey said late on Saturday it would make the necessary and appropriate national contribution to implementing the U.N.-authorised no-fly zone over Libya and measures to protect civilians.

"I wish to see an end to the bloodshed and to see the will of the Libyan people dominant," Erdogan said.