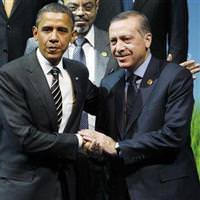 According to the information obtained, the U.S. President called Prime Minister Erdoğan and the two spoke for awhile. Supposedly, during the conversation the two leaders discussed the developments in Libya and exchanged views on the issue.
LIBYA SUMMIT
Last night, Prime Minister Recep Tayyip Erdoğan chaired a meeting to discuss the unfolding events in Libya. The meeting, held in the Prime Ministry lasted approximately an hour and a half. Foreign Affairs Minister Ahmet Davutoğlu, Minister of National Defense Vecdi Gönül, Chief of the General Staff Işık Koşaner and MİT Undersecretary Hakan Fidan attended the meeting, while 15 minutes later State Minister and Chief Negotiator Egemen Bağış also joined the summit.