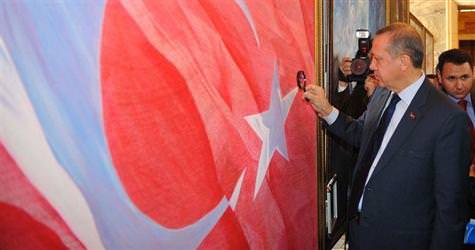 Erdoğan referred to the comments made by France’s Minister of the Interior Gueant, who stated President Nicolas Sarkozy, was leading a ‘crusade’ in Libya, as ‘inconsideration.’

Prime Minister Recep Tayyip Erdoğan called the term used by French Interior Minister Claude Gueant, who stated that President Nicolas Sarkozy was leading a 'crusade' in Libya as 'inconsideration'. Speaking at the International Community Gender Equality Meeting, Erdoğan expressed that Turkey played a demanding and active role in bringing NATO into play on the Libya issue and went on to deliver the following messages:
'EYES OF CONSCIENCE'
"I wish for our Western friends to see through the eyes of conscience when they look at this region instead of solely seeing the East and South as rich petrol, gold mines and underwater treasures.
Turkey's EU membership would enable the East and the West to better understand each other. However certain people, despite all of our warnings, are confusing minds with an operation directed at Libya. Unfortunately, they are also making extremely inconsiderate descriptions, referring to the advance as a 'crusade'. Not only are they actors, but also a definition such as this leaves the mind with question marks.
This entire process has resulted in revealing Turkey's legitimacy on the issue. Recent developments have shown how correct Turkey is in its attitude, stance and warnings.
Turkey was insistent and took an active role in NATO taking over the situation in Libya. Humanitarian support was given to the Eastern Mediteranean and Benghazi. We want NATO and the Arab league to act jointly, thereby ensuring what took place in Iraq does not happen here.
Never will our Turkish planes or our soldies shoot rounds at out Libyan brothers, nor will we have planes delivering bombs. At this stage, we are exerting intense efforts to ensure that this does not turn into a mistake and Libya is not regarded for its petrol but is instead seen through the eyes of conscience."