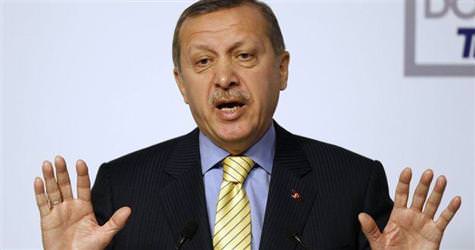 Turkey pressed on Thursday for NATO to have sole control over all military operations in Libya, voicing suspicion that some partners seeking to act outside NATO had their eyes on Libya's mineral wealth.

Parliament in Ankara was due to vote on Thursday on whether to support the government's decision to participate in a NATO naval operation to enforce an arms embargo.

Turkey, a Muslim member of NATO, has said it would also support a no-fly zone so long as it was aimed at protecting civilians and the mission was conducted by NATO alone, without any parallel offensive operations by coalition forces.

In a swipe at France, Prime Minister Tayyip Erdogan said the same people who were reluctant to let Turkey into the European Union now spoke in terms of "crusades" regarding Libya, chiding the West for its attitude towards nations to the South and East.

"I wish that those who only see oil, gold mines and underground treasures when they look in that direction, would see the region through glasses of conscience from now on," he told a conference in Istanbul.

French Interior Minister Claude Gueant said on Monday that President Nicolas Sarkozy had "taken the lead of a crusade to mobilise the U.N. Security Council, the Arab League and the African Union" to prevent massacres in Libya.

French Foreign Minister Alain Juppe played down the comment as a slip of the tongue but said on Thursday that the term "crusade" -- originally mediaeval Christian European invasions to capture the Holy Land from Muslims -- should be avoided.

Speaking to Turkish journalists accompanying him on a visit to West Africa on Wednesday, Turkish President Abdullah Gul aired suspicion that some coalition governments had ulterior motives and that Libya could be "looted" as Iraq had been.

"Why? Because the aim (of coalition forces) is not the liberation of the Libyan people. There are hidden agendas and differing interests," Gul said.

The president said the coalition lacked an agreed policy, planning and exit strategy and questioned the motives for intervention in the oil-and-gas-rich North African country.

"I worry that the things that happened in Iraq may repeat itself in Libya. Iraq was looted; now I am afraid that the same will happen in Libya," he said. A presidential aide forwarded his comments to Reuters from Accra.

After days of sometimes heated wrangling, NATO envoys were set to resume talks later on Thursday to try to overcome differences -- mainly with Turkey -- on taking over command of military operations against Muammar Gaddafi's forces in Libya from the United States.

Turkey told NATO on Wednesday it did not want the alliance to take responsibility for offensive operations that could harm civilians or to be in charge of enforcing a U.N.-mandated no-fly zone while coalition planes were simultaneously bombing Libyan forces.

"When it comes to the no-fly zone issue, we are positive towards enforcement of this by NATO, but it has to be enforced 'only' by NATO," the official said.

He said France wanted something different.

"What France is considering is continuing the operations by the coalition and getting support from NATO at the same time, but this is not what we want. We are saying, if NATO is going to do this, NATO 'alone' should do this," the official said.