Tatlıses applies to run in upcoming election from his hospital bed 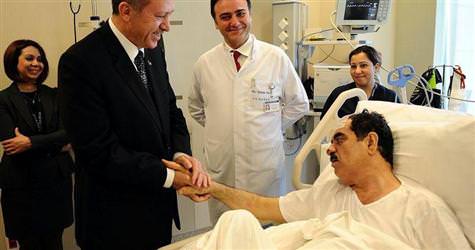 Prime Minister Erdoğan paid a visit to Ibrahim Tatlises and announced that he has received his application to run for congress from Istanbul’s third district.

Prime Minister Erdoğan paid a 20 minute visit to Ibrahim Tatlises yesterday in the hospital he his receiving treatment. Upon leaving the hospital, Erdoğan stated, "I think he looked good. There is nothing wrong with his speech and his memory is fine. There is nothing wrong with his right side, but there is a little something on his left side."
Prime Minister Tayyip Erdoğan paid a visit to popular performer Ibrahim Tatlises in the Maslak Acıbadem Hospital yesterday. When asked about Tatlises candidacy in the election, Erdoğan responded by stating that he had received Tatlises' application. After Erdoğan departed the hospital yesterday, those close to Tatlıses took action to get a formal apply for the election. The singer's cousin, Abdullah Tatlı brought a folder containing his records and a photograph to file an official application to run as an AK Party Parliamentarian Candidate to the Prime Ministry Office. Expressing that Erdoğan had requested the necessary documents for Tatlises' application during his visit to the hospital, Tatlı stated; "I have brought all of the documents requested for the application. They had already been prepared. If this attack hadn't taken place, he was going to apply to the AK Party District Headquarters on Monday."
When asked which district Tatlises would run in, Tatlı stated, "We were discussing the third district. However it is up to the Prime Minister's discretion."
'HE LOOKS WELL'
Meanwhile Prime Minister Erdoğan, who paid an approximate 20 minute visit with Tatlıses, stated that he thought he looked good. "I thought Mr. Ibrahim looked very good. We had a nice conversation. When I told him I was going to Adana tomorrow, he requested my speech. He is being transferred to a room on a higher level and out of intensive care. This is of course a sign that the doctors think he is doing well. Therefore I think that his physical therapy treatment will soon reap results. There isn't anything wrong with his right side. There is a little something on his left side, but I believe he will overcome it. There is no problem with his speech and whatnot and it appeared his memory was also good." When asked, Erdoğan responded smiling that he had indeed received Tatlıses' application to run in the June 12th elections.