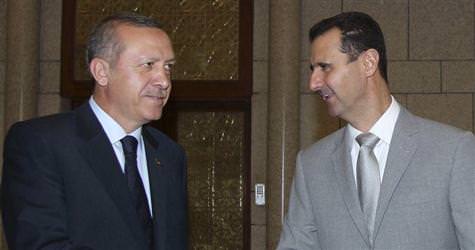 Turkish Prime Minister Tayyip Erdoğan said on Monday Syrian President Bashar al-Assad had not given him "a negative answer" when he urged him to listen to his people in two telephone calls over the last three days.

Erdoğan, speaking at Ankara airport before leaving for a visit to Iraq, said he had suggested to Assad that he meet some of the demands of thousands of people who have taken part in pro-democracy demonstrations across Syria.
"The Syrians said they were working on lifting the state of emergency to meet demands. They told us they were working on political parties ... we hope these measures are actually implemented rather than remaining promises," Erdoğan said.
"We did not receive a negative answer when we urged Mr. Assad to listen to the voice of people. I hope he makes the announcement today or tomorrow."
Dozens of people have been killed in the demonstrations, which have presented Assad with the gravest crisis in his 11-year rule. On Saturday, he deployed the army for the first time in the port of Latakia.
Turkish officials have been guarded in commenting on events in Syria. Relations between the two countries have improved since Erdoğan's AK Party came to power, while Turkey's old friendship with Israel has soured.
"It is impossible for us to remain silent in the face of these events, we have an 800 km (500 miles) long border with Syria," Erdoğan said.
Turkey's ruling AK party has implemented a reform program since coming to power almost a decade ago to try to strengthen democracy and modernize the economy.
Asked about operations in Libya, to be taken over by NATO, Erdoğan said Turkey had agreed to take responsibility for humanitarian aid distribution at the airport in the rebel stronghold Benghazi and Turkish naval forces would help control the corridor between Crete and Benghazi.
"We have not been the country who is dropping bombs or firing bullets, and nor will we be," he said.
Erdoğan and Foreign Minister Davutoğlu are expected to attend an international meeting in London on Tuesday to discuss the Libya operation and the country's future.
Erdoğan, who is expected to win a third term in office in an election in June, told Britain's Guardian newspaper in a report published on Sunday that Turkey was prepared to act as mediator to broker an early ceasefire in Libya and he said any drawn-out conflict risked turning Libya into a second Iraq.