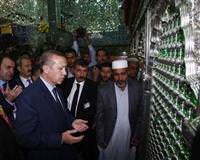 The second day of Prime Minister Erdoğan's trip to Iraq was the scene of a series of historical firsts. Yesterday, Erdoğan paid a visit to the tombs of Kazimiye and Imam-I Azam Ebu Hanife in Baghdad. Later, the premier went to Najaf where visited Imam Ali's shrine.
MEETING WITH SISTANI
After praying at Prophet Ali's mausoleum, Erdoğan walked to the home of Shiite leader the Grand Ayatollah Ali al-Sistani. The Erdoğan-Sistani meeting lasted for an hour. Erdoğan's next stop was the center of the Northern Iraq Regional Kurdish Administration, Arbil.
GREAT INTEREST IN ARBIL
The first ever trip to the region by a Turkish Prime Minister resulted in arousing excitement. Masoud Barzani greeted Erdoğan at the entrance of his plane. During his stay, Erdoğan participated in the opening of the Arbil International Airport as well as the Turkish Consulate in Arbil.
Erdoğan's second day in Iraq was devoted to providing a message of brotherhood between Sunni and Shiite Muslims. Not only did Erdoğan pay a visit to the tombs of the seventh Twelver Shi'ah Imam Musa al-Kadhim and the ninth Twelver Shi'ah Imam Muhammad at-Taqi but he also paid a visit to the tomb of Imam-e-Azam Abu Hanifah, very significant figures for Sunnis.
Later, leaving Baghdad for Najaf, Erdoğan became the first Sunni leader to ever visit the shrine of Imam Ali, cousin and son-in-law of the Prophet Muhammad and an extremely significant figure for Shiites. Afterwards Erdoğan went on to Arbil, becoming the first ever Turkish Prime Minister to visit Northern Iraq. Throughout his travels, Erdoğan was greeted with intense displays of love by Iraqis, while intensive security measures were also in place throughout his trip. Sistani's Special Forces as well as Maroon Berets were on duty as Erdoğan walked along a street in Najaf.
Today and tomorrow, Prime Minister Erdoğan moves on to England for an official two-day trip.