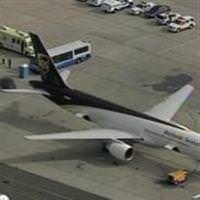 Britain is investigating how a suspicious package travelled undetected on a cargo plane to Turkey, media reported on Wednesday.

The UPS flight travelled to Istanbul from Britain two weeks ago carrying a package with a timer, wires, a detonator but no explosives, ITV news said.

A Department for Transport spokesman said it had launched an investigation into all aspects of the incident, including UPS's procedures.

"The government is aware of this incident and takes it very seriously," he said.

Police said a 26-year-old man arrested last week on suspicion of making a bomb hoax had been released on bail.

Last October, a bomb disguised as an ink toner cartridge was found on a UPS plane flying from Yemen to the United States when it stopped for refueling at Britain's East Midlands Airport.

The BBC quoted a UPS spokeswoman as saying the company was cooperating with the investigation.