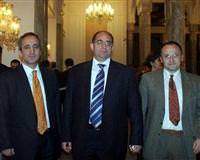 Newly appointed as Deputy Chief Public Prosecutor, Zekeriya Öz will no longer have any involvement in the Ergenekon investigation. The sole authority in the case has now been granted to Fikret Seçen.

Yesterday, the Supreme Board of Judges and Prosecutors, or HSYK, made a series of new appointments which included the reassigning the top prosecutor in the Ergenekon case. The most symbolic figure in the investigation, Zekeriya Öz has been promoted as Istanbul's Deputy Chief Public Prosecutor. With his special authority removed, Öz no longer retains any authority in the Ergenekon investigation.
FIKRET SEÇEN GRANTED 'SPECIAL AUTHORITY'
While another prosecutor in the Ergenekon investigation Ercan Şafak was also made Deputy Chief Prosecutor, Fikret Seçen was appointed as a Special Authority Deputy Chief Public Prosecutor. From here on out, Seçen, granted 'Special Authority' and the new special authority prosecutors he selects, will be in charge of conducting the Ergenekon investigation.
RULING REACHED WITH FIVE VOTES AGAINST TWO
The decision to name Zekeriya Öz to the position of Istanbul Deputy Chief Public Prosecutor was voted on by the seven-member First Department of the HSYK, with five affirmative votes and just two against the appointment. In response to the news, Öz states, "I wasn't expecting it. This is a surprise. We have utmost respect." Meanwhile, by a decree, Turan Çolakkadı was appointed as Istanbul Chief Public Prosecutor.
Erdoğan's response to the appointment was as follows:, "I don't interfere in the judiciary's job and the judiciary shouldn't interfere in mine."
Meanwhile, prior to being appointed to his new position, and still acting as the top Ergenekon prosecutor, Zekeriya Öz had just recently issued an order for the homes and offices of six academics to be investigated in connection to the Zirve Publishing house massacre. None of the academics were arrested in the raids.
CRITICISM HAD INCREASED
Criticism regarding Zekeriya Oz's handling of the Ergenekon case had increased with the recent arrests of journalists Nedim Şener and Ahmet Şık, upon which President Abdullah Gül had stated that "prosecutors and courts should act more precise in realizing their responsibilities." After Gül's statement, Prosecutor Öz had announced that the aforementioned arrests had nothing to do with the suspects' careers as journalists, however Öz stated that he was unable to release information regarding why the journalists had been apprehended as it would compromise the case. Debate surrounding the arrests reached a peak with the recent raid on a publishing house to recover the unpublished draft of Şık's book. President Gül dished up further criticism, by stating, "They are now going to sell 100,000 copies of a book they were only going to print 10,000 copies of." While criticism also rained in from the United States and the European Commission, reactions within the AK Party also increased.
'I WASN'T EXPECTING THIS'
Appointed as Deputy Chief Prosecutor, a position deemed more administrative than active, and having had his 'Special Authority' revoked, prosecutor Öz states, "It was a surprise, I wasn't expecting this. The court is not the prosecutor's property. This is a good thing. I can set aside more time for myself and my family."