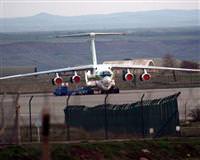 Turkey has informed a U.N. Security Council panel that it seized a cache of weapons Iran was attempting to export in breach of a U.N. arms embargo.

Security Council diplomats said the report of the seizure from an Iranian cargo plane reflected positively on Turkey, which some U.S. and European officials say has taken a lax approach to implementing international sanctions against Iranian financial institutions.

The report to the council's Iran sanctions committee, which oversees compliance with the four rounds of punitive steps the 15-nation body has imposed on Iran over its nuclear program, said a March 21 inspection turned up the weapons, which were listed as "auto spare parts" on the plane's documents.

The plane was bound for Aleppo, Syria, and was given permission to pass through Turkish airspace provided it made a "technical stop" at Diyarbakir airport, the report said.

"The above-mentioned items were seized and have been stored in a military warehouse in Diyarbakir," said the report, which was sent to the Iran sanctions committee on March 29.

The Turkish seizure was the latest in a string of reported Iranian violations of the sanctions imposed on Iran for refusing to halt a nuclear enrichment program that the United States, European Union and their allies suspect is part of a weapons program. Tehran says its nuclear program is peaceful.

Colombia's U.N. Ambassador Nestor Osorio, who chairs the Iran sanctions committee, told the Security Council last week that "the increase in the number of reported sanctions violations is a matter of serious concern."

Security Council diplomats said it was not clear whether Iran had stepped up its efforts to skirt the sanctions or countries have become more vigilant in enforcing them.

It was not clear whether Syria was the intended final destination of the weapons. There were no indications on the weapons crates of who the recipient was or where the shipment would have gone had it not been intercepted by the Turks.

"The crew were detained and interrogated by the Diyarbakir State Prosecutor," the report said. "They denied any knowledge about the prohibited items on board, as well as the identity of the consignor or consignee."

The crew were released and allowed to return to Tehran on March 22, but the case is still being investigated, it said.

The United States and Israel have said they suspect Iran uses Syria as a conduit for weapons transfers to militant groups in Lebanon and the Gaza Strip. Iran and Syria deny the charges.

One of the items -- aluminum powder seized in Singapore -- was originally thought to be from North Korea, though investigators now believe that the powder came from a Chinese firm, diplomats told Reuters. The other item -- phosphor bronze discovered in South Korea -- also came from a Chinese company.

There was no evidence that the Chinese government was involved, though diplomats said the incidents raised questions about Chinese export controls and concerns about the readiness of some Chinese companies to defy the sanctions regime.

Britain has complained publicly about a shipment of Iranian weapons allegedly bound for Taliban insurgents in Afghanistan.

Nigerian authorities complained to the sanctions committee about an Iranian arms shipment it seized last year that Tehran said was a legitimate trade deal with Gambia. Nigeria is prosecuting one of two Iranians allegedly involved in the deal.