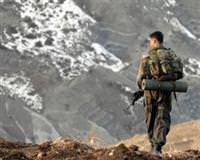 It was the largest number killed in a firefight with the PKK, the Kurdistan Workers Party, since last summer.

The PKK called off a six-month long ceasefire in February raising fears that violence would pick up before a national election in Turkey on June 12.

Military operations were continuing in the area near the site of the clash by the town of Hassa in Hatay province, said the military officials, speaking on condition of anonymity.

Syria and Turkey went to the brink of war in 1998 over Syrian support for the PKK, but political and economic ties between Ankara and Damascus have flourished since then. Last year, Syrian security forces rounded up 400 suspected PKK.

Turkey is closely monitoring unrest that recently flared in Syria, and has encouraged Syrian President Bashar al-Assad to make political and economic reforms.

Hundreds of troops are moving to the region in convoys amid the spring thaw, when fighting in the mountainous region traditionally picks up.

Soldiers also patrolled remote areas further west in Diyarbakir, Tunceli and Bingol provinces in anticipation of clashes with the PKK after the group ended its one-sided truce.

The PKK took up arms in 1984 in a bid to carve out an ethnic homeland in southeastern Turkey, but has scaled back demands to greater political autonomy and cultural rights for Turkey's estimated 15 million Kurds.

The conflict erupted at 01:30 am early Friday when the seven PKK terrorists responded with fire to security forces requesting them to stop in a rural region located between the Hassa and Akbez districts.
Security forces recovered seven M-16 infantry rifles, 14 hand grenades, 4 kilo A4 plastic explosives, rocket ammunition, backpacks as well as other equipment was recovered from the terrorists persons.