133 martyrs made to rest in peace 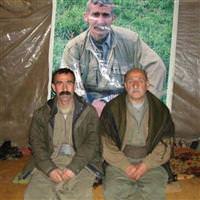 It turned out one of the PKK terrorists recently killed in Hatay was in charge of the organization’s regional division and responsible for killing 113 citizens in 87 separate attacks.

One of the seven PKK terrorists killed in conflict in Hatay, it appears Aydın Baran was to be in charge of the PKK terrorist organizations Amanos Mountains wing. Baran was sent to Hatay to replace the PKK's former regional leader Medeni Sayilgan, who went by the name of 'Panzer Kemal'.
NUMBER TWO LEADER
Baran, who has been an armed militant with the PKK terrorist organization for 21 years, has been wanted since 1991 for being involved in 87 separate events in which 113 soldiers and citizens were killed. Supposedly Baran is the right hand man of Syrian El Muhammed, the leader of the PKK's militant wing.
HATAY WING TAKES A HIT
A number of weapons as well as maps downloaded from Google of Hatay were confiscated from the PKK members killed.
The seven terrorists killed last Thursday in Hatay's Hassa district had crossed into Turkey from the Syrian border and were tracked upon their entry by thermal cameras. When the terrorists did not adhere to the command to turn themselves in, conflict erupted resulting in the deaths of the terrorist members. One of the terrorists killed is said to be Aydın Baran who uses the code name "Mazlum Bardakçı". Forty-three year old Baran had been sent to the Amanos district to take over command from Medeni Sayılgan.
MAP OF THE REGION
Baran was carrying secret documents and action plans pertaining to the organization, and a laptop he was holding is being further investigated. A CD found in one of the terrorist's backpacks contained maps of both city centers and the rural regions of Samandağ, Dörtyol, İskenderun, Hatay, Kırıkhan, Reyhanlı, Osmaniye and Hassa, which had been downloaded from Google. The terrorists were also carrying other maps and two GPS, while Baran was also holding 41 bank notes at 100 TL each.
NARROW ESCAPES
PKK operative Aydın has been wanted since 1991 for his involvement in the organization. According to records, between the years 1991-2007 Baran was in charge of the organization's Diyarbakır wing. Later, he commanded 250 people in the Halkurk Camp located in the Kandil region, and was supposedly the head of Tabur. In 1996, he narrowly escaped security forces in combat which resulted in the deaths of 85 PKK terrorists. After Abdullah Öcalan was arrested, he went to Northern Iraq and was in charge of militant activities until 2004. Up until 2007, Baran acted as assistant to the Syrian leader of the organization's militant wing, Halef El Muhammed, who went by the code name "Sofi Nureddin". During this time, Baran ordered a series of 87 attacks in Diyarbakır, Erzurum, Muş, Bingöl, Elazığ, Tunceli and Erzincan, which resulted in the deaths of 113 soldiers and civilians. As a result, there have been separate files opened on Baran in Diyarbakır, Erzurum and Malatya.