Turkey to sound out Libyan sides on possible truce 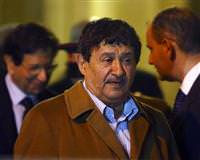 Turkey said it was seeking to broker a ceasefire in Libya as an envoy from Muammar Gaddafi's government arrived in Ankara on Monday, with representatives of the Libyan opposition also expected in the coming days.

"Turkey will continue to do its best to end the sufferings and to contribute to the process of making a road map that includes the political demands of Libyan people," Davutoglu said.

Davutoglu said Turkey was also in contact with the opposition's National Council, and expected representives to visit Ankara "in the coming days".
A Turkish Foreign Ministry official said both sides had "conveyed that they have some opinions about a possible ceasefire".

"We will talk and see if there is common basis for a ceasefire," the official said.

Obeidi had delivered a message to the Greek government in Athens on Sunday that Gaddafi wanted to end the conflict between his army and the rag-tag rebel forces, which have been backed by Western air power.

Obeidi was expected to go to Malta on Tuesday.

Turkey has been in contact with both the Gaddafi and opposition camps in recent weeks, with the aim of ending the conflict.

A month ago, Turkish Prime Minster Tayyip Erdogan had suggested to Gaddafi that he hand over power to an elected leader or authority.

But those efforts came to nought as Gaddafi reacted defiantly to a U.N. resolution saying he should be investigated by the International Criminal Court.

Turkey, the main Muslim member of the NATO alliance, enjoys growing clout in the Middle East.

But amid the rising clamour against Gaddafi, Turkey's criticism remained muted during the early days of Libya's descent into conflict, as it was focused on securing the safe evacuation of nearly 20,000 Turks working in the oil-rich North African country.

Having criticised a Western coalition for unleashing air strikes on Gaddafi's forces last month, Turkey subsequently backed NATO taking over the mission, with the express objective of halting attacks on civilians and securing a ceasefire.

A Turkish ferry on Sunday picked up around 250 casualties from Misrata, as Turkish warplanes provided cover.

Aside from having sizable commercial and trading interests, Turkey has strong historical ties with Libya, which had been part of the Ottoman Empire prior to World War One.

Erdogan's government has responded to the upheaval caused by an eruption of pro-democracy movements round the region by advising Middle East leaders to reform in order to meet the demands of their people.

Many young Arabs look to Erdogan's AK Party as an example of a Muslim party making democracy work within a secular framework.