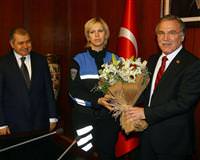 Turkish political leaders accused the military on Thursday of interfering in the judiciary after it strongly criticised the detention of 163 officers in a trial over an alleged plot to overthrow the government.

Turkish political leaders accused the military on Thursday of interfering in the judiciary after it strongly criticised the detention of 163 officers in a trial over an alleged plot to overthrow the government.

Retired General Cetin Dogan, former head of the prestigious First Army and No. 1 suspect on the indictment, is among 196 officers charged in the case.

The "Sledgehammer" plot allegedly included plans to trigger conflict with Greece and bomb historic mosques. Retired commanders of the navy and air force, Admiral Ozden Ornek and General Halil Ibrahim Firtina, and other senior officers were among the accused.

"If only such a statement was not made. It was viewed as interference in the judiciary," Parliament Speaker Mehmet Ali Sahin told reporters in parliament.

"I know our General Staff attaches great importance to the independence and impartiality of the judiciary. I know they have played their part in the development of democracy in Turkey," the state-run Anatolian news agency reported him as saying.

The general staff statement said it had "difficulty in understanding" their continued detention and that it had repeatedly explained the nature of the seminar.

Criticism of its statement also came from a minister in Erdogan's AK Party, which is on course for a third successive victory in the general election on June 12.

"This attitude is an old, unpleasant tradition in our country," said Culture and Tourism Minister Ertugrul Gunay.

"I would have hoped that this would not emanate from the commanding ranks on an official website," he told a television channel on Wednesday evening.

Military statements have been rare since General Isik Kosaner took the helm at the armed forces last August. However, he was joined by other military commanders in visiting the officer defendants in jail in February.

The army pushed an Islamist-led government from power in 1997 and has staged three coups since 1960. However, its extensive powers have been curbed under EU-inspired reforms and further military intervention is regarded as highly unlikely.

Relatives of the Sledgehammer defendants protested against their detention outside an Istanbul court house on Thursday.

The wife of retired General Cetin Dogan, told reporters her husband would run in the June election as an independent parliamentary candidate. The army's public criticism of the Sledgehammer detentions coincided with the appointment of a prosecutor to assess petitions to try officers behind the 1980 coup - a move enabled by constitutional changes made after a referendum last year.

The army's statement followed the replacement of prosecutors handling the trial of hundreds of defendants accused of membership of the shadowy, ultra-nationalist Ergenekon network, also accused of planning to overthrow Erdogan's government.