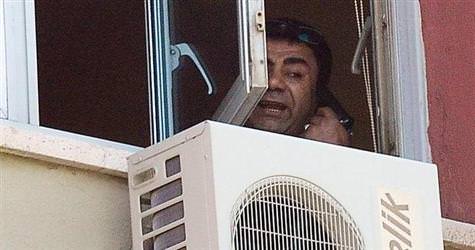 The public servant who raided a meeting at the Social Security Institute in Muğla and murdered the manager, was prevented from committing a massacre of the hostages he held, by relaxants slipped in a tea he was offered by police.

Forty-year-old Hasan Sünnetçioğlu was a public servant at the Muğla District Social Security Institute or SGK. The Manager of the Muğla District SGK, Naci Şahin had opened an investigation into Sünnetçioğlu. Yesterday, Sünnetçioğlu crashed a meeting wielding a weapon and killed Naci Şahin, while taking five other public officers hostage, threatening to kill them. Police then decided to give Sünnetçioğlu water and tea, which they had laced with a relaxant. Sünnetçioğlu drank both the water and tea and then turned himself in two hours later.
Sünnetçioğlu was a supporting chief at the Muğla SGK department until he was recently reprimanded and demoted to registry chief. Yesterday morning he raided a meeting where he shot manager Naci Şahin straight in the head, killing him, upon entering the room and saying, "What's up Naci."
Sünnetçioğlu expressed plans to kill the other managers in the meeting, and police prevented a further massacre by adding relaxants to his tea.
Sünnetçioğlu worked as a support chief for the Muğla Social Security Institution District Department, and was in charge of procuring materials and tenders. The District manager Naci Şahin had opened an investigation into Sünnetçioğlu. Following the results, Sünnetçioğlu was relegated to registry chief. In response, yesterday morning Sünnetçioğlu walked into a district managers meeting wielding a gun, He then went up to Naci Şahin and said, "What's up Naci?' before pulling the trigger. At first the gun jammed, forcing Sünnetçioğlu to pull the trigger for a second time, killing Şahin amidst looks of shock from those sitting around the table. Balıkesir District Manager Cem Dinç and Uşak District Manager Fevzi Gökçe ran out of the room.
Sünnetçioğlu proceeded to take the Aegean District and Izmir District Manager Mustafa Keskin, Aydın District Manager Yavuz Poyraz, Denizli District Manager Ahmet Kurt and Aydın's Çine District Manager Necmettin Öz and public officer İlker Tatar hostage. Manisa's District Manager was late to the meeting, thereby saving himself from the catastrophe. While Special operations teams began preparations to stage an operation, the governor and police chief were joined by a psychologist to try to convince the perpetrator to surrender. Sünnetçioğlu responded by saying he was going to kill everyone in the room and then commit suicide. Upon hearing this, Police Chief Kadir Ay and Department Manager Yılmaz Ergül offered Sünnetçioğlu tea and water to calm him down. When he drank the laced tea, he relaxed and announced that he would turn himself in after explaining what he has been put through on live television. The police chiefs accepted his request upon which the perpetrator came to the window and placed the gun at his head while stating, "I worked with honor and pride. I never allowed for embezzlement. I was separated from my wife and child. They unrightfully opened an investigation on me, and then I was demoted which was hard for me," he yelled.
Sünnetçioğlu then handed over his gun to Ay and was arrested and taken to prison. When asked by journalists whether he had planned to kill the hostages, Sünnetçioğlu stated, "I would have never murdered them. I was going to kill myself. I regret what I did."