Last round for the AKP to determine election candidates 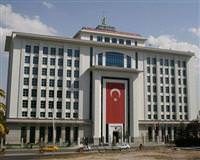 Prime Minister Recep Tayyip Erdoğan has arrived to the AKP Head Quarters to put the final touches on the party’s list of candidates for the upcoming general election.

All parties must submit their list of candidates for the upcoming general election to the Supreme Election Board today by 17:00. Erdoğan, accompanied by his staff, will be going over the candidate list for a final time prior to submitting the party's candidate names later today.
With just hours left before Turkey's political parties must submit their candidate lists for the upcoming June general elections to the Supreme Election Board, the Justice and Development Party, or AKP, Head Quarters has begun to buzz with activity. After working on the list for the past week, the commission will convene for a final meeting chaired by Prime Minister Erdoğan to put the finishing touches on the party's candidate list. The AK Party is expected to turn in their candidate list by 16:00 and to publicly announce the names to the public at 17:00 today.


In addition to the anticipation of a number of surprise candidates, expectations are that a number of current deputies may be left out. Those considered to have secured spots on the candidate list are Prime Minister Erdoğan's close working friends who have resigned to become possible candidates, Nabi Avcı, Çağatay Kılıç and Yalçın Akdoğan as well as former Police Department Chief Oğuz Kağan Köksal and Public Order and Security Undersecretary Muammer Güler.

The AKP also received a number of candidate applications from famous figures including football players Hakan Şükür and Tanju Çolak as well as famous performer İbrahim Tatlıses, who applied to Erdoğan personally from his hospital bed, where he was being treated following a recent horrific attack.

Both the AK Party and CHP worked into the morning hours to complete their candidate lists. AK Party's Chairman Tayyip Erdoğan had 5,500 candidate applicants to consider, while the Peoples Republic Party, or CHP, suffered a major quake within the party as a number of significant figures were excluded from their candidate list.
The Peace and Democracy Party, or BDP, has 64 independent candidates on their list, including famous actress Hülya Avsar's cousin. Eight current party deputies however were excluded from the party's list.