A seven and a half hour nightmare 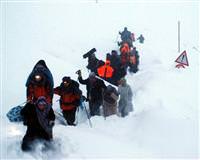 Trapped in snow in April… Twenty-six people were stranded due to avalanches yesterday at the Ovit Mountain section of the Rize-Erzurum highway.

As Turkey awaits the arrival of spring, it appears the nation has revisited the darkness of winter. The Ovit Mountain pass which connects Rize to Erzurum and is located at an elevation of 2,600 was overcome by a series of avalanches yesterday. Twenty-six people in a midibus, two trucks and three vehicles were stranded yesterday in the snow-covered road. Eleven of those stranded walked three and a half kilometers to safety. It took seven and a half hours of intensive efforts by rescue teams to save the remaining 15 stranded due to the harsh weather conditions that have enveloped the country.
It all started in the early morning hours yesterday when an avalanche blanketed the İkizdere- İspir Ovit Mountian section of the Rize-Erzurum highway. Eleven people were stuck in the snow on the overpass, which was just opened to transportation ten days ago. Forced to walk three kilometers' distance in the snow, the 11 stranded finely found solace in the Çamlık Rescue Center. Later at approximately noon, three other avalanches once again covered the mountainous portion of the highway, trapping two trucks, a midibus and an automobile transporting a total of 15 people, including seven women and one child, which took shelter in an Öz İspir company midibus.
As soon as news surfaced of the vehicles stranded along the 66th kilometer of the Rize-İspir highway, a number of organizations joined forces to mobilize and save the stranded. The Department of Highways, the Union of Village Services, Civil Defense, AKUT, the Black Sea Maintaining, Kayaking and Expertise Club and the District Department of Health all dispatched teams, while ambulances and snow vehicles were also sent to the region.
Rize Governor Seyfullah Hacımüftüoğlu as well as other officials maintained continuous contact with the stranded, informing them of when teams were dispatched and when they anticipated the rescue to transpire.
Efforts lasted until the evening hours, when at 17:30, three people were rescued. Two hours later those stranded in the midibus were reached. The 15 stranded walked a 500 meter distance in 45 minutes, accompanied by rescue teams where vehicles were awaiting their arrival.
Last year, just one kilometer away, 17 were stranded and it took 39 hours for them to be rescued.