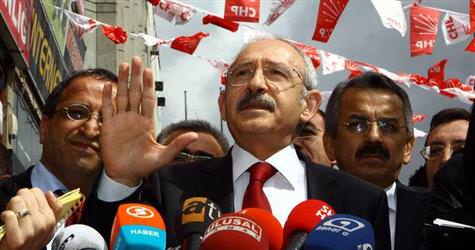 Turkey's main opposition party, trailing in opinion polls before a June vote, dropped old guard loyalists and introduced a record number of women as party candidates in a bid to regain ground lost to the ruling AKP.

"A revolution has been made on the lists. Women and youth have gained importance on our lists," Kemal Kilicdaroglu, head of the secularist Republican People's Party (CHP) told reporters on Tuesday, in what some commentators described as a purge in a party that has not tasted power for decades.

Opinion polls show Prime Minister Tayyip Erdogan poised to easily win a third consecutive term of single-party rule for the Islamist-leaning Justice and Development Party (AKP) in an election to be held on June 12, as the AKP benefits from a decade of economic success and a weak opposition.

Kilicdaroglu, who took over the helms of the CHP last year after its past leader quit in a sex scandal, swept out three-quarters of the party's current legislators from the list of candidates, including the powerful former secretary general Onder Sav, a hardline secularist.

In their place were many young faces who are running for the first time and 109 women candidates from a list off 550 candidates presented late on Monday. Two defendants in a trial concerning an alleged plot against the government and which the CHP has called a witch hunt are also on the CHP's list.

Created by Mustafa Kemal Ataturk, the founder of modern Turkey, the CHP has lost some of its appeal to middle-class voters by resisting liberal economic and political reforms brought in by the AKP as part of Turkey's bid to join the European Union, and by goading the army and judiciary into trying to halt the AKP's increasing dominance.

Western diplomats and analysts say the lack of democratic alternatives in Turkey is a hindrance to the EU candidate's long-term political and economic development and has contributed to a climate of polarization. AKP has been in power since 2002.

Whatever drama is left on election night will center on the margin of the AKP's victory, pollsters say.

Erdogan is seeking a strong mandate that will allow him to introduce a new constitution to replace the charter drafted after a 1980 coup. A move to a more presidential form of government is among the changes being considered.

There are less than 10 percent of women MPs in Turkey's 550-seat parliament, one of the lowest levels in Europe.

"Women have an important role in our party organization. We wanted to take that importance to the parliament," Erdogan told reporters late on Monday.

One of the women candidates is Gulderen Gultekin, who wears a Muslim headscarf despite a law that bans religious garments for civil servants.

Wearing the headscarf is a touchy issue in Turkey, which is overwhelmingly Muslim but has a strictly secular constitution.

The AKP, which critics accuse of having an Islamist agenda, has been under pressure from grass roots organizations and women's groups to nominate headscarf-clad candidates.

Gultekin, however, is unlikely to win a seat in the next parliament as she is placed at the bottom of a list of candidates running in the Mediterranean city of Antalya.