Ricciardone tries out his Turkish 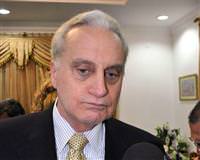 For an ambassador, mastery of the language of his hosts is supposed to help oil the wheels of diplomacy. For the U.S. envoy in Turkey this week it didn't quite work that way.

Ambassador Francis Ricciardone exchanged salty Turkish sayings with a senior adviser to Prime Minister Tayyip Erdogan, in his latest high-profile spat with authorities in Ankara.
Turkey has warned the ambassador twice in as many months against meddling in its domestic affairs, after he expressed concern over the detentions of journalists in Turkey.
Implying a contradiction between Turkey's pledge of support for media freedom while it detains reporters, Ricciardone, a Turkish speaker, told a Turkish journalist this week: "I learned a wonderful expression: Bu ne perhiz bu ne lahana tursusu." It can be translated as: "why are you eating cabbage pickles if you are on a diet?" Fuat Tanlay, Erdogan's foreign policy adviser, issued a riposte in a Turkish daily.
"The ambassador has been using Turkish expressions to show that he knows Turkish well," Tanlay said.
"Since he is so enthusiastic to learn Turkish, we have also another expression: cami duvarina isemek. He had better learn this expression as well." The saying literally translates as "pissing on a mosque wall", meaning to get into trouble for one's words or actions.
In February, Foreign Minister Ahmet Davutoglu said it was "not right" for Ricciardone to comment on cases of journalists detained in Turkey, while Erdogan called Ricciardone "amateur".
U.S. ally Turkey has pushed through a series of political reforms with the aim of securing European Union membership, but rights groups remain critical of its record on freedom of expression.
Turkish courts are hearing a series of cases on alleged coup plots and journalists are among those detained.
Ricciardone was appointed in December.
Though Muslim Turkey is a U.S. ally, surveys show Turks mistrust the United States.