Turkey tells Israel: Gaza flotilla not up to us 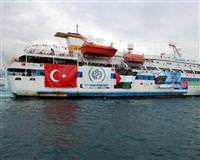 Turkey said on Thursday it had received a request from Israel to help stop activists sailing to Gaza on the first anniversary of an Israeli raid on a Turkish ship, but it said the flotilla plan was not Ankara's concern.

Turkey, a Muslim former ally of the Jewish state, has scaled back ties, demanding Israel apologize and pay damages for last year's raid, which caused an international outcry.

Nine Turks were shot dead in the May 31 clash when Israeli marines stormed a flotilla organized by a Turkish Islamist charity, which ignored orders to turn back as it tried to breach an Israeli blockade of the Gaza Strip.

The Free Gaza Movement, a pro-Palestinian activist umbrella group, has said that a flotilla expected in late May would comprise 15 ships with international passengers including Europeans and Americans.

Asked about the request, a Turkish foreign ministry official told Reuters: "We listened to the message given by the Israeli side and told them this is an initiative by civil society."

The official did not elaborate.

The IHH, the Turkish Islamist charity that owned the Mavi Marmara ship which was raided by the Israeli commandos, has said it will join the "Freedom Flotilla II." It also plans to send its own convoy led by the Mavi Marmara after Turkey's general election on June 12.

An IHH official told Reuters the group has not been approached by the Turkish government over its plans to send another flotilla and added: "In Turkey governments don't tell NGOs what to do and what not to do."

Israel has also asked the United Nations to help stop the activists. Israeli Prime Minister Benjamin Netanyahu told U.N. Secretary-General Ban Ki-moon that the mission of ships "was being organized by Islamic extremist elements" intent on bringing about "a flare-up."

Turkey, a secular Muslim nation, has been an important regional ally of Israel for more than a decade.

Ankara has demanded an apology as a condition for mending ties, regardless of a U.N. probe's findings into the incident.