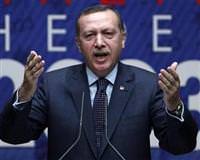 Turkish Prime Minister Tayyip Erdoğan promised to draft a new constitution and make Turkey one of the world's 10 largest economies by 2023 as he launched a party manifesto on Saturday ahead of June elections.

Opinion polls show Erdoğan's AK Party (AKP) comfortably securing a third consecutive term of single-party rule in the vote, on the back of a decade of economic success and political stability.
Unveiling what he called the AKP's manifesto for 2023, Erdoğan offered few concrete proposals but said he would slash unemployment, build homes for the poor and push on with economic reforms that have transformed the Muslim country from an economic basket-case to a stable, fast growing economy.
Erdoğan has said he wants a strong mandate that will allow him to introduce a new constitution to replace the one drafted after a 1980 coup. On Saturday he repeated that pledge.
"We'll start working on a new constitution right away, to support democracy and freedoms," Erdoğan said during a speech at his AKP headquarters in Ankara without giving details.
A move to a more presidential form of government from the current parliamentary system is among changes being considered.
Erdoğan, who is believed to covet the presidency, did not mention plans for a presidential system in the manifesto.
Formed as a coalition uniting religious conservatives with liberal and nationalist groups, Erdoğan's AKP has been Turkey's dominant political force since it crushed establishment parties tainted by graft in 2002.
Investors regard the AKP as the most market-friendly party, due to economic policies that have brought inflation to record lows, opened the doors to foreign investment and helped Turkey become one of the fastest growing economies in the world.
In his speech, Erdoğan said his AKP had "restored the honour" of the Turkish lira and defeated "the monster called inflation that lived in the people's pockets." He said Turkey will be "among the 10 largest economies in 2023."
If re-elected for a third term in June, Erdoğan would not be able to run in the next elections set for 2015 under party law.
His mention of 2023 -- the 100th anniversary of the foundation of modern Turkey by Kemal Ataturk -- will fan suspicions that Erdoğan, a former Istanbul mayor, harbours long-term political ambitions and is planning to elevate himself to a presidency with stronger powers.
He has spoken before of his vision for a "Great Turkey" in 2023.
Secularist rivals accuse AKP of having an Islamist agenda. The AKP, which evolved from banned Islamist movements, denies this and says it is a Muslim version of Europe's Christian Democratic parties.