One dead in protests over election ban 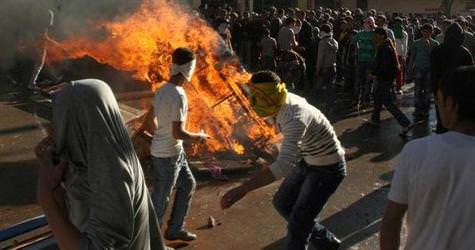 One protester was shot dead during a second day of clashes between police and demonstrators in southeast Turkey after a dozen Kurdish politicians were barred from contesting a national election.

Police fired water cannons and tear gas on protesters hurling petrol bombs and stones in the city of Diyarbakir, and a 26-year-old man died during clashes in the nearby town of Bismil.

The BDP has threatened to boycott the June 12 parliamentary poll over the bans, and Demirtas backed out of meeting President Abdullah Gul on Wednesday due to the shooting.

"Today in Bismil police opened fire on protesters and one person was killed. Because of this incident I will not go to the presidential palace," Demirtas was quoted as saying. "I will tell President Gul by telephone about the brutality here."

Gul had invited Demirtas for talks to defuse tensions that flared on Monday after the High Election Board barred candidates because of criminal convictions, some due to links to militant groups, notably the PKK.

Gul's political ally Prime Minister Tayyip Erdogan is expected to comfortably win a third successive term. But the ruling AK Party runs second to the BDP in the southeast, despite the prime minister's efforts to improve rights for ethnic Kurds.

Gul held talks with Parliament Speaker Mehmet Ali Sahin, an AK member, who has called on the election board to reconsider its decision.

The BDP was planning to enter all its 61 candidates in the election as independents to maximize its chances of representation should the party overall win less than the required 10 percent of the vote to enter MPs into parliament.

The candidates' lawyers were seeking court documentation on Wednesday that would show they were eligible after the board said it would consider appeals.

Security forces responded by firing water cannon and tear gas to disperse the demonstrators. Some 30 people were detained.

Ocalan heads the PKK terrorist group, which launched an armed insurgency against the state in 1984. More than 40,000 people have died in the conflict.

The PKK ended a six-month ceasefire in February, and there have been sporadic clashes.