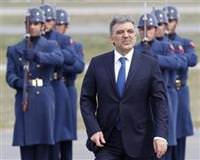 President Abdullah Gül urged Israel to make peace with the Palestinians as a strategic response to a wave of popular uprisings in the Arab world and to long-term demographic trends working against the Jewish state.

"Israel cannot afford to be perceived as an apartheid island surrounded by an Arab sea of anger and hostility," Gül wrote in an op-ed piece in the New York Times published Thursday.
The revolts in the Middle East and North Africa reflect a yearning for democracy by Arabs also seeking "to regain their long-suppressed national pride and dignity," Gül argued.
Israel would need adapt to the new political climate in the region but need not fear it. "The emergence of a democratic neighbourhood around Israel is the ultimate assurance of the country's security," the Turkish president wrote.
Turkey, which brokered indirect peace talks between Israel and Syria that ended when Israel launched an offensive in the Gaza Strip in December 2008, stands ready to help, he declared.
Turkey's once-warm relationship with Israel cooled after strong Turkish criticism of the Gaza operation and deteriorated further when Israeli commandos killed nine Turks aboard an aid ship trying to break Israel's Gaza blockade in May 2010.
"PEACE ONLY BETWEEN PEOPLES"
Gül said democratic Arab governments that may emerge could not afford to pursue foreign policies "perceived as unjust, undignified and humiliating by the public." History showed true peace could only be forged between peoples, not ruling elites.
"For years, most governments in the region did not consider the wishes of their people when conducting foreign policy."
Egyptians and Jordanians have never embraced the peace treaties signed with Israel by their U.S.-backed governments. Many Palestinians also chafe at interim deals with Israel.
Gül urged Israeli leaders to reconsider a 2002 Arab League peace initiative which proposed full relations with Israel if it returned to borders before the 1967 Middle East war to make way for a Palestinian state.
"Sticking to the unsustainable status quo will only place Israel in greater danger," he wrote.
"In the coming 50 years, Arabs will constitute the overwhelming majority of people between the Mediterranean and the Dead Sea," he wrote. "The new generation of Arabs is much more conscious of democracy, freedom and national dignity.
The Turkish leader said the United States had "a long-overdue responsibility to side with international law and fairness when it comes to the Israeli-Palestinian peace process" and should act as an impartial and effective mediator.
A "dignified and viable Palestine" living alongside Israel would fortify the Jewish state's security, he added.
U.S. Secretary of State Hillary Clinton said this month that her country planned a new push to promote Arab-Israeli peace.
After 18 years of talks that have failed to gain them a state, Palestinian leaders aim to ask the U.N. General Assembly in September to recognise statehood on all of the West Bank and Gaza Strip, which were occupied by Israel in the 1967 war.
U.S.-brokered peace talks between Israel and the Palestinians broke down last September in a dispute over continued Jewish settlement building in the occupied West Bank.
Israeli Prime Minister Benjamin Netanyahu has warned against unilateral moves such as declaring statehood, arguing that a solution could only be achieved by direct negotiations.
"It will be almost impossible for Israel to deal with the emerging democratic and demographic currents in the absence of a peace agreement with the Palestinians and the rest of the Arab world," Gül wrote.