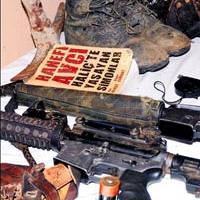 Turkish security forces killed three Kurdish terrorists in a firefight in southeast Turkey, after two days of street clashes across the region.

The mainly Kurdish southeast has witnessed increasingly violent protests since Monday's decision to bar some Kurdish independent candidates from the June parliamentary election.
There was no indication of any link between those protests and the clash between soldiers and militants from the PKK terrorist organziation, which took place in countryside in Kahramanmaraş province.
The province, north of the Syrian border, is further west than the militant group's usual field of operations near the border with Iraq. One PKK terrorist surrendered after the clash.
Fighting between the terrorist organization and Turkish security forces has been sporadic since the PKK ended a six-month ceasefire in February. Violence generally increases each spring as rebels cross the border from bases in the mountains of northern Iraq.
The PKK took up arms against the state in 1984 and more than 40,000 people have been killed in the conflict.
On Wednesday, the U.S. Treasury blacklisted several leaders of the PKK as drug traffickers, prohibiting any transactions with them by U.S. citizens. The Turkish Foreign Ministry welcomed the move.
One protester was shot dead in the southeastern province of Diyarbakir on Wednesday as violent demonstrations spread against the High Election Board decision to bar 12 independent candidates, of which 7 were backed by the main Kurdish party.
The Election Board was meeting on Thursday to review the ban, having earlier rejected their candidacies because of previous criminal convictions, some for links with the PKK.
The Kurdish Peace and Democracy Party has threatened to boycott the June 12 parliamentary poll over the bans.