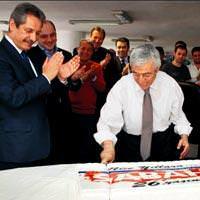 Sabah Newspaper celebrated the 26th anniversary of its founding in the newspaper’s editorial department floor.

The cake-cutting ceremony was attended by staff from the editorial department, the magazine, economy, sports graphic design, editorialists and administrative staff. Çalık Holding Chairman of the Executive Board Ahmet Çalık, Çalık Holding General Manager Berat Albayrak, Turkuvaz Medya Grubu Vice President of the Executive Board Serhat Albayrak and SABAH Newspaper Editor in Chief Erdal Şafak cut the cake. Speaking at the celebration, Ahmet Çalık stated that from the day the paper was founded, SABAH has brought a new air to the Turkish press and is a leader in innovation and diversity.
"The innovations realized by SABAH, in order to provide a quality newspaper that goes even beyond the public standards of our day, have always acted as an example for its competitors." Çalık went on to state.
"Standing out with its just and impartial journalism and remaining at an equal distance to all segments of society, while collaborating with some of the world's most prestigious press establishments, SABAH has acquired a distinguished place in readers hearts as a reliable source of news."
Emphasizing that SABAH is just as dynamic as it was on its very first day, Editor in Chief Erdal Şafak began his address by stating, "There are both many differences and none, between last year and the one present."
"A PIONEER OF INNOVATION"
Stating that "from last year up until this year, SABAH continued to sail on peaceful seas as a pioneer in innovation,"' Şafak went on to thank the administrators that have created this harmonious environment.