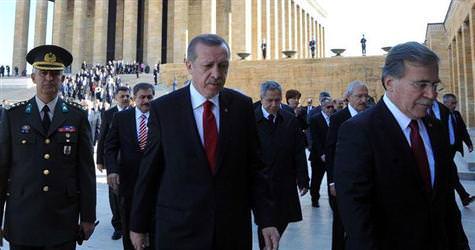 Amongst the numerous ceremonies ongoing for April 23rd National Sovereignty and Children's Day, Speaker of the Parliament Mehmet Ali Şahin, accompanied by a number of state leaders, paid a visit to the Atatürk Mausoleum.

The ceremony was attended by Speaker of the Parliament Şahin, Prime Minister Recep Tayyip Erdoğan, CHP Chairman Kemal Kılıçdaroğlu, MHP Chairman Devlet Bahçeli, as well as a number of deputies and members of the council of ministers.
After laying a wreath on Atatürk's tomb, a moment of respect was held and the national anthem played.
Şahin later went on to the Misak-ı Milli Tower, to sign the Mausoleum Special Book, in which he wrote the following:

We are at your presence as the TBMM executive board on the 91st anniversary of the parliament, which you not only opened but served as its first chairman and which under your pioneering we conduct our nation.
Turkey's Grand National Assembly, since the day of its opening up until now, works to our nation's development, to unify with the modern world and to advance and reinforce democracy. Your love for the people and the grand nation in the struggle for liberty as well as your goals to surpass the modern civilization order and your struggle for progress will always lead the way.
The Grand National Assembly is determined with all of its power, to strengthen national hegemony, and for democracy and freedoms to further advance, and for our country to become a leader of the era. We want to offer our gratitude for the powerful nation and modern democratic standards you left to us.
May God bless your beloved soul.''