Execution first followed by a ceremony 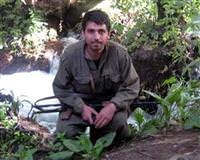 Upon receiving reactions from fellow organization members, a terrorist killed by the PKK for ‘betraying’ them was then exhumed from his grave and reburied with a ceremony conducted as if he had died by accident.

The PKK terrorist organization has experienced two counts of tension due to executions within the past two weeks. It was first revealed that on April 4th, Öcalan's birthday, four organization members were burned to death, and now it appears on April 7th another terrorist, who was caught escaping the Kandil camp, was executed.
HE WANTED TO LEAVE THE ORGANIZATION
Born in Bismil and having been integral in a number of events staged over the past 12 years, 32-year-old Harun Amed, who goes by the code name Mahir Özbek wanted to cut his ties with the organization. He was subsequently trapped in a cave and killed by the organization for his 'betrayal'. However, the execution ignited responses in the organization as well as from the terrorist's family. The leaders then decided to claim Özbek's death was an accident.
STAGED CEREMONY RECORDED ON VIDEO
In order to prevent further reactions, Özbek's body was secretly exhumed, and was then reburied in a ceremony also attended by Murat Karayılan, the PKK's Kandil leader. A recording of the funeral, which contained a note reading, "A Martyr from an Accident" was then sent to his family via e-mail.