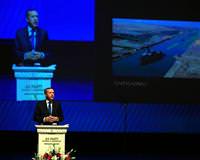 For about six months now, there has been speculation surrounding a certain project, the details of which Prime Minister Erdoğan revealed today: Istanbul will be getting a new channel.

Today, Prime Minister Tayyip Erdoğan released information regarding plans to build a water passage entitled 'Canal Istanbul' which will transform Istanbul into a metropolis consisting of two peninsulas and one island. Erdoğan states,"The Anatolian side is already a peninsula, however now there will be an island as well as another peninsula created by this project. We will be building a channel between the European side of Istanbul, west of the city, the Black Sea and the Marmara Sea which will be 45-50 kilometers' long.
We are bringing the 'Canal Istanbul' to Istanbul. Incomparable to the likes of the Suez Canal and the Corinth Canal, we are about to embark upon one of the most significant projects of the century.
The channel will be 25 meters' deep and the base will be 120 meters. The world's largest ships will be able to pass through this channel. There will be no interruptions made for highways or waterways. The millions of square meters of excavations will be used in the construction of a big port and airport.
The sporadic accidents that have occurred in the past have been hellish for the Bosphorus. Turkey is saving Istanbul from this danger. We are taking this big step, in order to bring an end to the cargo traffic along the Bosphorus. The channel will be more efficient for ship transportation.
This project will also result in establishing a new living center. The water will not be stagnant and will never cause a water problem for Istanbul. The channel will become an attractive investment area. Area studies will continue for approximately two years. A number of scientists and specialists will be working on the project. It will provide an employment opportunity for tens of thousands. Work on the project will begin following the June 12th elections and we will be primarily using treasury land."