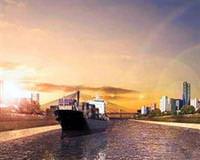 Speaking at a glitzy event to mark the government's vision for 2023, the centenary of the republic, Erdoğan unveiled plans to redraw the map in his home town in what he called a "crazy project" which also involves building a third airport there.
"Istanbul will become a city with two seas passing through," Erdoğan, a former mayor of Istanbul, said in a presentation that lasted around an hour and was broadcast live.
"We are building the canal of the century, a project of such immense size that it can't be compared to Panama or Suez canals."
He said the canal would be some 45-50 km (28-31 miles) in length, 150 meters (492 feet) wide at the surface, and have a depth of 25 meters (82 feet).
The canal to be built on the European side of Istanbul will link the Black Sea with the Marmara Sea, and will be large enough for supertankers up to 300,000 dwt to pass through.
"Istanbul will become a city with two peninsulas and an island," Erdoğan said.
"The first peninsula already exists: the Asian side. The island will be formed between the canal and the Bosphorus when it cuts through the city, leaving a peninsula on the west."
The aim is to relieve congestion through the Bosphorus Strait and reduce chances of an environmental disaster as tankers carrying oil and gas from Russia and Central Asia pass through the waterway separating the Asian and European halves of Istanbul.
"We are going to put an end to the heavy burden of traffic on the Bosphorus. Our aim is for between 130 and 160 ships passing through the Canal Istanbul," Erdoğan said.
The planned third airport for Istanbul will have capacity for 60 million passengers annually, he said.
The value of the projects was not given, but Erdoğan expects to raise financing easily.
Kemal Kilicdaroglu, leader of the main opposition Republican People's Party (CHP), said it was a scheme to enrich the AK Party.
"This country needs men who think and produce, but not crazy men. This project is not about people. It's about making AK Party supporters rich," the CHP leader said.
Having run the country since 2002, Erdoğan's AK Party is expected to secure a third term of single party rule when the country votes on June 12.
Opinion polls suggest a victory of similar margin to the 2007 result, when the AK scored 46.4 percent of the vote.
The economy is a crucial factor for voters, even those who remain suspicious of the Islamist pedigree of Erdoğan and other AK leaders.
Having inherited a country in hock to the International Monetary Fund and struggling to recover from the 2000/01 financial crisis, the AK proceeded to win over investors and bankers through its sound policies.
During Erdoğan's tenure Turkey has passed through a period of unprecedented prosperity that has given confidence to a country once seen as one of Europe's poor relations.
While industrialized western Turkey has boomed, much of the Anatolian hinterland remains economically backward, and the national unemployment rate remains in double-digits.