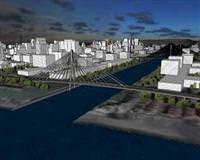 The Prime Minister has finally revealed details of the long awaited ‘crazy project’ planned for the city. A 50-kilometer long canal will connect the Black Sea to the Marmara, transforming the European side of the city into an island. The canal is intended to lighten sea traffic along the Bosphorus, as well as to bring in at least five billion dollars in revenue every year.

During a meeting held by Prime Minister Tayyip Erdoğan and the Istanbul Congress Center, to announce target for both Istanbul and Turkey for the year 2023, the highly anticipated 'Kanalistanbul' project was revealed to the public. While keeping the location and costs confidential, in order to not arouse speculations, Erdoğan started off his address by discussing the difficulties experienced in Istanbul in the past.
DREAMT ABOUT FOR YEARS
Explaining that during his time as mayor, Erdoğan spent 4.5 years trying to improve Istanbul. Reminding of how they transformed the Ümraniye dump, where 39 people lost their lives into a park and of how they moved the mud from the Golden Horn to Alibeyköy and that their dreams of following such significant figures as Alparslan, Osman Gazi, Fatih Sultan Mehmet, Mimar Sinan and Mustafa Kemal Atatürk have been realized, Erdoğan states, "All big steps start with a dream. This amazing project is as much a dream of mine, my comrades as well as of those who ran Istanbul hundreds of years ago." Erdoğan was cheered on as the "Grand Master" and he also read poems written by Yahya Kemal in honor of Istanbul.
Prior to the start of the program, the screen on the stage read, 'There are tens of cities in the world that have a river running through them. However there is only one city with a sea running through it and that is Istanbul.'
STUDIES AFTER THE ELECTION
Announcing that the tanker traffic along the Bosphorus will be moved to the canal, Erdoğan states; "There are many cities with a river running through them, however Istanbul will be the only one to have two seas passing through it."
"This project is an energy, transportation, public works, agricultural, educational, employment, urbanizing, family, property, culture and tourism project. Most importantly however, it is an environmental project. It is a project geared towards protecting Istanbul's surroundings, nature, sea, water sources, greens, animals and plants
We will continue to keep the project's cost and precise location under wraps in order to prevent any negativity or injustice. Studies for the project will begin after the June 12th election and will take two years. During this time, changes may be made to the location and cost of the project. This project that we have begun now will transform Istanbul into a city in which two seas pass through. It will not be possible to even compare the Panama, Suez or Corinth Canal to what will be one of the century's most significant projects.