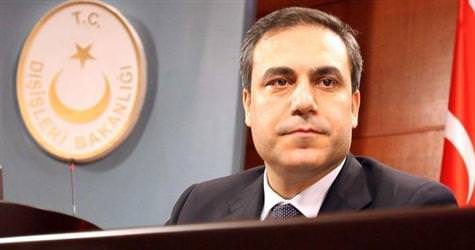 Turkey's intelligence chief met Syrian President Bashar al-Assad Thursday as part of a senior delegation sent to Damascus to suggest reforms that could help end an uprising against authoritarian rule.

Relations between the neighbors have warmed considerably in recent years and Prime Minister Tayyip Erdogan has been in close contact with the Syrian leader, urging him to exercise restraint since protests against Assad's 11-year rule began six weeks ago.

Fidan has already visited Damascus at the start of the crisis as Erdogan's special representative.

"This delegation will hold meetings with the Syrian authorities about reforms that could be made," a foreign ministry official told Reuters.

"The delegation will share with Syrian officials Turkey's experiences in the fields of political and economic reforms."

The delegation also met with Syrian Prime Minister Adel Safar and other officials. It was due to return to Ankara later Thursday.

Assad is facing rare dissent from within his Baath Party and signs of discontent in the army over the violent repression of protesters that a rights group said Thursday had killed 500 people.

Erdogan has warned Assad that unless he undertook urgent reforms he could be toppled in the same way that popular uprisings have ousted autocrats elsewhere in the Middle East this year.

Ankara's ambassador to Damascus, Omer Onhon, was expected to give a briefing on the situation in Syria to Turkey's National Security Council Thursday. He met the Syrian prime minister at the start of the week.

Turkish and Syrian ministers have held strategic cooperation meetings in the last couple of years in a bid to strengthen ties which in past decades had been strained.

The two countries went to the brink of war in 1998 when Ankara threatened military action unless Damascus handed over Kurdish guerrilla leader Abdullah Ocalan. The subsequent capture of Ocalan calmed the tensions.

Worsening unrest in Syria could lead to security concerns in Turkey, given the religious, sectarian mix in the neighborhood.

Turkey is a leading Muslim partner in NATO, and as a stable, democratic country it enjoys growing clout in an unstable region. President Barack Obama conferred with Erdogan Monday over the upheavals in the Middle East.