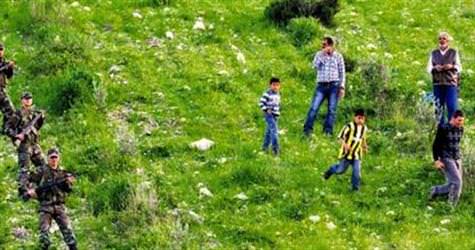 Recent developments in Syria have brought Ankara on alarm.

When a group of approximately 250 people crossed over the border with Syria into Turkey, Ankara felt the need to assess the situation. Foreign Minister Ahmet Davutoğlu was forced to cut a trip to Konya for work on the upcoming parliamentary election short and returned to Ankara with his wife Sare Davutoğlu. Davutoğlu went on to chair a 'Syria Summit' which was held at the Foreign Affairs Residence at 21:30. The summit lasted two hours and 15 minutes and was attended by Minister of the Interior Osman Güneş, General Staff Second Chief General Aslan Gürel, National Intelligence Agency Undersecretariat Hakan Fidan, Turkey's Ambassador to Damascus Ömer Önhon, Ministry of Foreign Affairs Undersecretary Feridun Sinirlioğlu as well as high level members of the Prime Ministry. At the end of the summit, it was decided that Damascus Ambassador Ömer Önhon would return to Syria.
Meanwhile, the Red Crescent is setting up tents in the center of the Yayladağı district to accommodate the Syrian nationals which have taken refuge in Turkey.