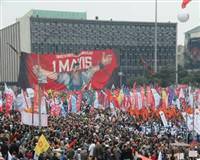 May 1st Labour Day celebrations were attended by members of a variety of organizations and segments for a lively fare held in Taksim Square on Sunday. Police refrained from entering the Square which resulted in nonviolent celebrations with not a single person arrested. Festivities ended with dancing.

Thirty-four years later, the sign depicting a worker breaking through chains, which was identical to one hung in 1977, referred to as Bloody May Day, was hung up on the Ataturk Cultural Center building once again.


Demonstrators and members of a variety of unions, civil society organizations and political parties marched to Taksim Square from four different spots in the city to celebrate May Day under the legendary 495 square meter sign displaying a worker in chains, which has since 1977 represented the violent events which transpired on that unfortunate day in the exact same square. The festivities in the square kicked off with the sending of a kite which read 'revolution' into the air followed by a musical concert Celebrations were marked by speeches and music while tens of thousands from all walks of society danced and cheered on the festivities in Taksim Square.

POLICE DONNED 'HD HELMETS' FOR THE FIRST TIME
While in the past, May Day celebrations have been known to turn violent, this year, thousands celebrated Labour Day in peace. Police assigned to Taksim Square and its surroundings wore helmets containing cameras this year. By using this technology police chiefs planned to record how the riot police under their command conduct themselves in large-scale demonstrations such as the festivities held yesterday.

THE DECEASED REMEMBERED
Most infamously, the square was the scene of a violent outbreak on May Day celebrations in 1977, which resulted in the deaths of 34 people, killed by snipers. Yesterday, for the first time since that fateless day, the symbolic poster of the 'chained worker' was once again hung up in Istanbul. During the ceremony yesterday, the names of each individual killed on May 1st, 1977 were read aloud and responded to by saying 'Here'.